And, as promised, here are some excerpts from my upcoming Wyrd Ways of Walstock module... 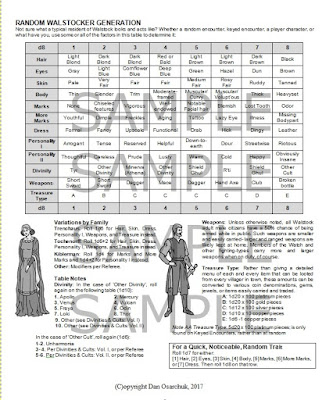 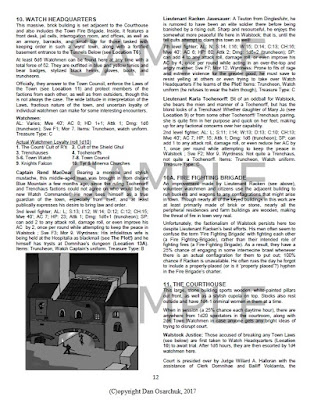 The full module (PDF) will be available for sale sometime within the next week.  I'll post when it's ready!


Next week: we resume Divinity Updates with Priestesses of Potnia, Minoan Snake goddess: Part I!
Posted by Dan Osarchuk at 4:02 PM No comments: 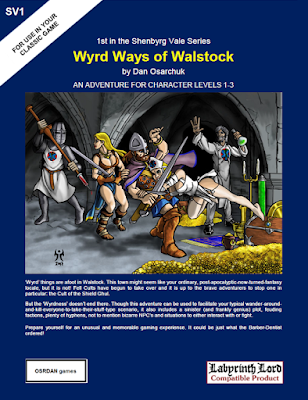 I wanted to take a two-week break from Divinity updates to pitch my upcoming (and very first) module to my many readers. As you can see from the wonderful cover picture by Luigi Castellani, it is a tribute to classic adventure with a twist of political satire thrown in.

From the cover:
“‘Wyrd’ things are afoot in Walstock. This town might seem like your ordinary, post-apocalyptic-now-turned-fantasy locale, but it is not! Fell Cults have begun to take over and it is up to the brave adventurers to stop one in particular: the Cult of the Shield Ghul.

But the ‘Wyrdness’ doesn’t end there. Though this adventure can be used to facilitate your typical wander-around-and-kill-everyone-to-take-their-stuff-type scenario, it also includes a sinister (and frankly genius) plot, feuding factions, plenty of hyphens, not to mention bizarre NPC’s and situations to either interact with or stab to death.

Prepare yourself for an unusual and memorable gaming experience. It could be just what the Barber-Dentist ordered!”

The party will essentially be tasked with apprehending a certain eccentric individual, causing a cascade of events to unfold of both an intriguing and bizarre nature. And as my playtesters found out, this isn’t your normal dungeon delve-type adventure: one even suggested putting a warning on the label.

Coming soon to PDF on Drivethru RPG, unless the Hospitaliers exsanguinate me first!

Next week: Wyrd Ways Promo #2!
Posted by Dan Osarchuk at 3:48 PM No comments: 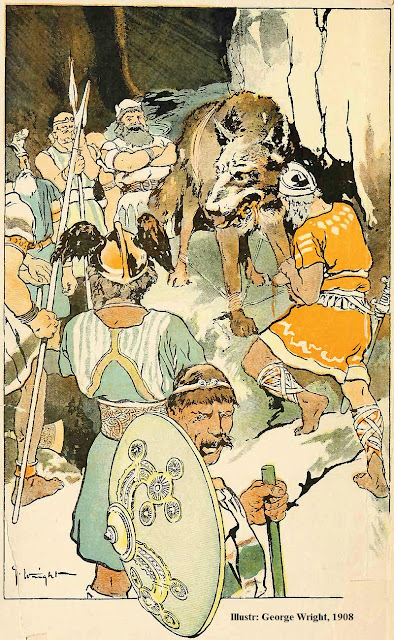 Cleric Spells (Fenrir)
The Great Wolf would rather his clerics bite and rip apart their prey, instilling fear and destroying all they encounter. But if they must cast a spell, then here they are- especially if such magic assists in biting off gods’ hands!

Fenris Cleric Foes
Though particularly vicious players might certainly enjoy portraying clerics of Fenrir, they are far more likely to be encountered as adversaries (that is Fenris clerics, not vicious players in this case).

The following table provides stats for such foes at various levels. With some minor modification, it could also be used for other types of clerics too.

* The effects of certain Divine Tests of Fenrir (Wolf-Hunger) can change his clerics permanently, granting them various boons and penalties that would affect the stats so marked. The cleric has a 10% chance per level of having experienced each of the following and would then be subject to the specific boons and restrictions thereof when encountered. See that section for specifics.

Roll for each:
1. An increased chance of hitting with their bite attack...
2. An improved AC & speed...
3. Larger size for greater Strength and Constitution...
4. Lycanthrope form...

Fenris clerics of higher levels can even have a chance of having experienced various Wolf-Hungers thrice or more (by beating the percentage by 40%, etc.), all depending on howl far the Referee is willing to go.

Next week: Preview of my upcoming module: Wyrd Ways of Walstock! 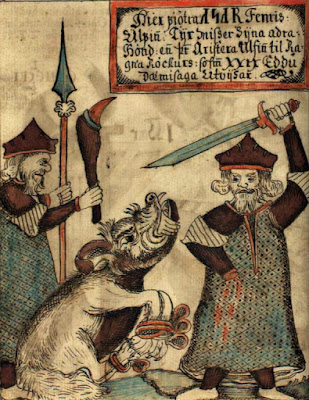 Wolf-Hunger
Fenrir compels his cleric to hunt, consume, and destroy- and he should relish the task! Such results can also be used to randomly determine what a Fenris cleric’s motivations are when encountered as an NPC: how quickly he will try to eat the party... and whether he will use relish or not!

Divine Tests
1. Hunters need rest to grow larger and more vicious. The cleric must do so for the next 2d6 turns unless any prey comes within 10’ of him first.

2-3. Fenrir’s hunger must be sated now! The cleric need bite the first being he sees but can save to resist the urge. If he saves, then he must bite the second being he sees, and so on. Once he bites a being, then this particular instance of Wolf-Hunger is complete, though the being will likely attack the cleric then (a base 75% chance)!

4-9. The Great Wolf consumes some of the cleric’s spells (50% chance for each one), making them unavailable until the next stroke of midnight. Roll 1d6 for each one lost to determine what the cleric need do to use it before then:
[1] Empower or assist a monster or other vicious beast with its hunting.
[2] Hunt, slay, and consume 3d6 HD worth of being(s).
[3] Terrify an innocent by stalking them- dressing up as their grandmother would certainly help add to the terror.
[4] Attack those who are in their homes, especially by using threats of blowing their house down.
[5] Slay a jailor or other one who chains, or even free one who is chained (who can then be eaten afterwards- with or without relish).
[6] Eat a god, or at least part of one (e.g. an arm)... or eat a follower of one of the gods if nothing else!

10-11. As offspring of Loki, Fenrir has been known to associate with gods and other demon lords. Use a Test from one of the following in this case rather than Wolf-Hunger, but make sure the results are wolfish nevertheless! Roll 1d3:
[1] Hel (see Volume I)
[2] Loki (see Volume I)
[3] Thrym (see Volume II)

12-17. Fenrir howls and his cleric changes, becoming forevermore like the Great Wolf himself. Roll 1d4 to determine his new trait. Subsequent instances of the same result will only compound the effects and the penalty that goes along with them:
[1] Gain a wolf head that improves the cleric’s chance to hit with his bite attack by +1 and any smell and hearing-based rolls by +3, but also gives him a -4 reaction penalty when dealing with any non-wolves, non-followers of Fenrir, or others who don’t particularly care for those with wolf heads.
[2] Gain a furry hide that improves his AC by 1 and speed by 10’ but also reduces his chances of successfully using his Turn ability by 3.
[3] Grow larger, gaining 1 foot in height and a proportional increase in weight along with a +1 Strength and Constitution bonus. Unfortunately, the cleric also loses the ability to cast one of his spells forevermore as a result, as well as not being able to fit into his favorite pair of pants ever again.
[4] Like a lycanthrope, the cleric changes into a wolf-man every night of the full moon. When this occurs, he experiences the changes for #1, #2, and #3 above. In addition, the cleric must kill anyone he encounters while in this state, unless they too are devotees of Fenrir. If the cleric already has experienced 1 or more of the changes above or experiences this result twice, then the effects and penalties double in magnitude. For example, if a cleric already has a wolf head, then his wolf head becomes more potent in lycanthropic form, granting a +2 to hit with his bite attack, improving smell and hearing by 6, as well as causing a -8 reaction penalty instead. He would also gain the furry hide and larger size of results #2 and #3 above.

18+ Ragnarok (or something close to it) occurs! A Fenris Wolf arrives within 1d6 rounds and then attacks everyone in sight until slain. See the Tyr entry in Volume I for details on these monsters (AC is 1 [18]). For every Wolf-Hunger result over 18, another one accompanies it. Though he might enjoy the carnage, the Wolves are just as likely to attack the cleric too!
Posted by Dan Osarchuk at 4:19 PM No comments: