One for the Fighters 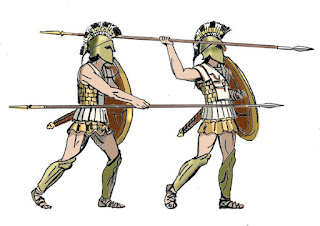 Nerds (such as I) were given far too many wedgies by the local football participants over the years to fully appreciate athleticism in the current era. On the other hand, ancient athletes; that is, the warriors of old are certainly compelling enough for me to honor in my writing, no matter how much they might have belittled men of smaller frame in their own time.

It takes an incredible amount of courage to fight in an actual battle as opposed to some game that involves running around lines. trying to knock each other over in plastic armor before some half-time show commences. It could even be said that the warriors of old, the fighters in our role-playing games, had to endure even greater terror than the usual scenario of fighting foes at least at some range, as is the case in the warfare of today.

Keep these facts in mind when reading Divinities and Cults, for in that book, fighters are given special rules on how to gain the most out of combat like the ancients did, without making your game imbalanced or overly complicated. How can you make your fighter into a viking or an amazon or a berserker or a hoplite? Refer to the book and find out! And stay tuned for the upcoming Divinities and Cults Volume II, which includes even more historical fighter options!

And remember always to honor these warriors, for after all, they most likely didn't give wedgies, since underwear wasn't even invented yet.


Posted by Dan Osarchuk at 5:10 PM No comments:

Div Cul for S&W is not a POD Dream! 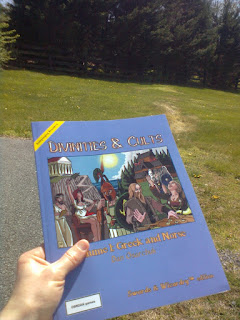 I know the title says it all, but I figured I should explain anyway: the Divinities & Cults for Swords & Wizardry version has been available in Portable Document Format (Div Cul for S&W PDF) for a few weeks now.... Don't forget to order your copy!

And for those with a Print Obsession (like me), we're still working on the proofs for the Print-on-Demand version (Div Cul for S&W POD) to make sure that it's Truly As Wonderful As Possible for Our Beloved Readers (TAWAP for OBR).

Fear not though!  It should be available soon!

Meanwhile, we (that is, Dan Osarchuk, himself, and he) are still working on getting Quiet Upon Shenbyrg's Dawning (novel #2) out to Amazon (Kindle and Print), as well as developing Div Cul Vol.II....
Posted by Dan Osarchuk at 12:21 PM No comments:

Here's a great video series about the Stone Age!

From ancestors buried under the kitchen floor.... that would occasionally be dug up to have their heads removed to vulture-picked carcasses dragged into the sky above (also with heads removed): I wonder what sort of Divine Tests they had? Hmmm..... 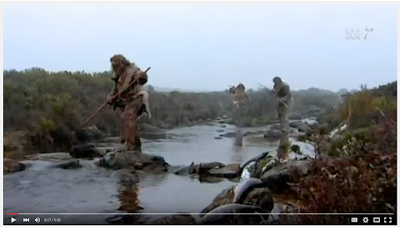 Posted by Dan Osarchuk at 6:13 PM No comments: