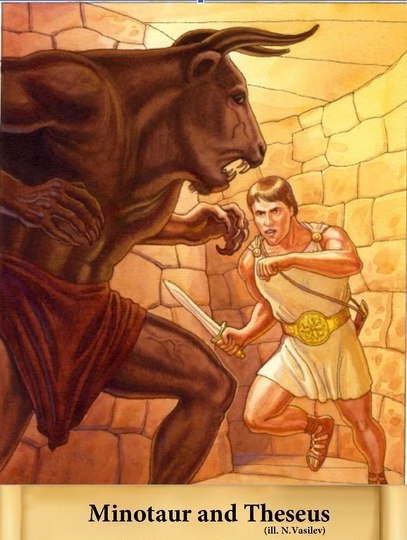 Large, ruminant-headed monstrosities (often with that of a bull), minotaurs can be associated with various divinities and cults. Herein is described the likely qualities of such associations, the disposition of the monster, as well as the origin of its presence.

(Listed physical qualities will be described next week.)

Minotaur's Disposition (d8)
1. Affirming Dominance: acts to violently subjugate any who fail to submit to their divinity (or demon lord) immediately, especially those who would subjugate normal animals of their head type (thus goat-headed minotaurs would herd shepherds, stag-headed minotaurs would stalk hunters, etc.).
2. Bloodthirsty: seeks only to kill and then gorge upon the gruesome remains. +2 to hit and damage, -4 AC penalty, and must save vs. death to resist feasting on fallen foes even if others are nearby.
3. Contemplative: wishes mainly to mate and graze, though will also offer insight once every 1d6 hours to those seeking to solve labyrinths (physical or mental); only violent if provoked.
4. Drunken: wanders in a stuporous haze, violently seeks more drink. -1d6 to all rolls involving coordination; immune to fear.
5. Guardian: ruthlessly protects an area from interlopers, tolerates those aligned with the divinity.
6. Lustful: works aggressively to mate- those who resist are forced.
7. Mad: acts in a random fashion- reroll on this table once and every 3 rounds thereafter.
8. Territorial: challenges those who are in the area (likely some sort of labyrinths), attacking those who don't flee in time.
Origin of Minotaur's Presence (d6)
1. Native: born of some abominable pairing (in the tradition of Pasiphae), it now dwells here.
2. Divine Curse: was once a man who then angered the Gods.
3. Test: as some divine test, a cleric (or the like) has been turned into one for a limited time.
4. Summoned: called upon by a cleric (or the like) who has used a sacrifice based upon the minotaur's disposition to encourage it to remain here.
5. Totemic Item: grasping or wearing such a fetish makes one become a minotaur; that is, until it is taken from the sorcerer.
6. Unholy Mask: one has donned a mask and became a monster forevermore, though he likely had monstrous aggression in him beforehand.
Summoning Minotaurs
Clerics (and other spellcasters) of divinities and cults listed above can add the spell Summon Minotaur to their spell list. Treat it as Summon Monster, except that only 1 minotaur may be summoned per day, its HD (usually 6)  determining the appropriate Summon Monster spell's level. It takes 1d6 rounds to arrive and then the spell's duration begins- when the cleric can actually give the monster commands to follow. Once the spell's duration ends, the minotaur will act according to its disposition (if it still lives, either remaining or leaving the area) unless the cleric successfully casts another Summon Minotaur spell to control it once more.
In any case, providing the minotaur with an offering (or sacrifice) that fits its disposition can increase the spell's duration by 50 to 100% (per Referee), starting after the minotaur is done partaking of it. So offering a drunken minotaur a keg of wine can entice it to stay longer to obey the cleric's will, just as leaving the area can draw in a territorial one- once either monster is done drinking or chasing off interlopers.
Next week: Minotaurs, Part II!
Posted by Dan Osarchuk at 4:12 PM No comments: 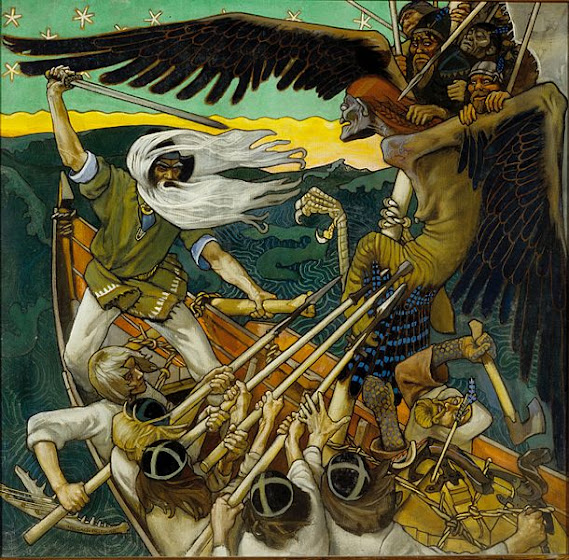 Louhi Encounters
Within the dark lands of Pohjola, many dangers lurk. Though such incidents are covered in Lemminkainen's and other Finnish divinities' encounters, the following three tables can be used to generate a great variety of such fell folk & beast. Thus, beware of hideous, arrogant, maniacal Pohjolan hounds that are immune to injury (but must stop to eat any food provided) and taunting old women who are flaming, poisonous, good at dueling, and very large!

Nature/ Personality (d12) - roll 1d4 times
1. Taunting
2. Inhospitable
3. Noisy
4. Aggressive
5. Blood-licking
6. Hideous
7. Vicious
8. Maniacal
9. Arrogant
10. Cruel
11. Scheming
12. Particularly hostile to Finns (or the like)
Type (d12) - roll once
1. Maiden
2. Babe
3. Old Woman
4. Swordsman
5. Host (male or female)
6. Hound
7. Wolf
8. Bear
9. Reptile (lizard or serpent)
10. Elk
11. Fearsome Bird
12. Horse
Abilities (d10) - roll 1d4 times
1. Charming: those who see them must save vs. death or be able to resist them
2. Prevents rest: those within their presence must save vs. spell or be unable to sleep or otherwise recover
3. Good at dueling: +3 to hit and AC is 3 better when in melee
4. Immune to injury, but must stop to eat any food provided
5. Poisonous: those bitten must save vs. poison or fall unconscious for 3d6 rounds
6. Very large: +4 HD (25% chance of having 100 eyes too)
7. Flaming: those who come within 3' take 2d6 fire damage per round
8. Uncatchable: those attempting to hold them must save vs. death or be unable to
9. Scary-faced: those who first see them must save vs. death or suffer a -2 to all rolls for the next 3d6 rounds
10. Noita abilities: level 1d8, 85% chance of also being a follower of Louhi
DCC Conversion Notes
Save vs. death= make a Will save DC 10
Save vs, spell= make a Will save DC 15
Save vs. poison= make a Fortitude save DC 15
Next week: we begin a new series, Men and Monsters for Divinities and Cults, beginning with the minotaur!
Posted by Dan Osarchuk at 5:46 PM No comments: 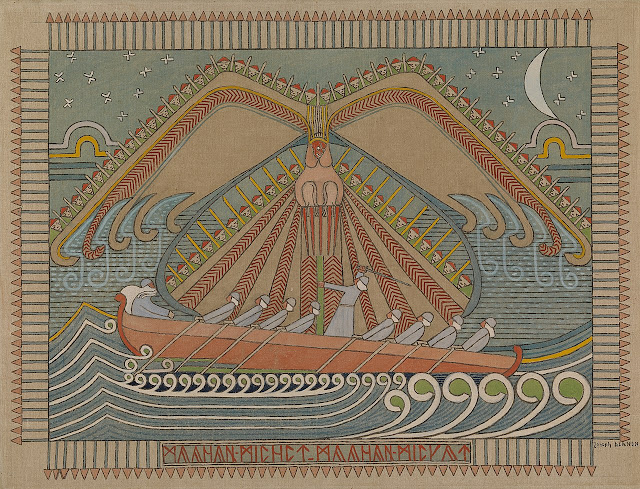 Next week: Noitas of Louhi, Part V!
Posted by Dan Osarchuk at 7:01 PM No comments: