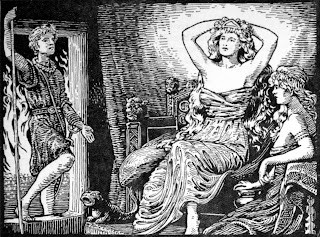 As god of fertility, Freyr grants healing, along with a little something something more.

d12
1-3. Wooing Health: The healing may occur, but only after the patient gives up his or her most prized mount or weapon. It will be returned within 1d6 hour's time, or the patient can opt to have Skirnir take it permanently. In this second case, there is a 1% chance (+ 1% per Charisma bonus the patient has, if any) that Skirnir will return with an attractive giant spouse for the patient within 1d6 hours. Otherwise, there is a 10% chance of him returning with an unattractive giant spouse instead! Finally, if the patient has neither mount nor weapon to give, then the healing occurs without any side-effect.

4-5. Gullinbursti-ride: Like Freyr, the patient will need either to ride in a chariot, enjoy the sun’s rays, and/or bask in some other golden wealth for at least 1d20 minutes first, before receiving the healing, preferably with a boar present.

6-8. Fertile Tilling: The healing needs a little encouragement from the cleric before it can commence. Whether it be a field or a maiden, the cleric will need to lay plow for at least 4d6 minutes. Afterwards, the healing will occur and with double the effect, if the field or the maiden is either a giantess, elvish, or a Swede.


9-12. Blessing of Freyr: The recipient is automatically healed for the spell’s full amount. What is more, if he or she happens to have made love, received at least 3d6 gold pieces, or has interacted with either giants, magic boar, elves, and/or Swedes sometime during the last 12 hours, then he or she also gains a +2 bonus to all Saves for the next 1d12 hours, +6 if all three apply.
Posted by Dan Osarchuk at 3:25 PM No comments:

Clerics of Freyr (Part I) * Spread fertility wherever you can, both in the folk and in the land
* Favor peace, only showing one’s war-prowess when necessary
* Let the bounty of life provide for you with joy and wealth
* Honor Elves and Swedes

Clerics of Freyr
Special: Clerics of Freyr are also known as priests, can be male or female, and often honor Freya too (see Divinities and Cults: Volume I)
Allowed Weapons: Sword, spear, dagger
Allowed Armor: None
Holy Symbol: Boar, Ship, Chariot, Phallus
Can Turn: None


Freyr Mysteries: Clerics of Freyr are so well-loved that all rolls made to harm them suffer a -1 penalty. They also gain a +2 bonus to a casting roll when engaged in matters of fertility or prosperity, up to once per day per level. 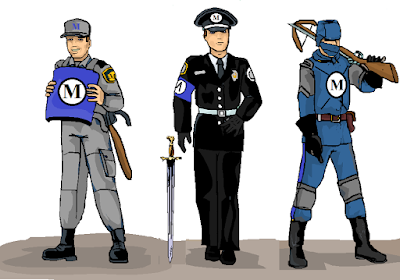 The mass troops of Mauriatown, greyshirts need only their loyalty to the Leader and their humanity as requisite for their caste. Protected with little more than their uniform and sense of devotion, they can prove surprisingly resourceful and resilient when under proper command.

The elite caste of Mauriatown, black hats are bred and selected for their strength, intelligence, and charisma- their other abilities are often superb, as well. Dressing much as Ancient watchmen in full uniform, they are an imposing sight to both ally and enemy alike. One can be sure that the black hats will be central to whatever task that the Leader may set, whether it be espionage, police action, security, battle, or other, special projects.

Maurian Blueshirt
No. Enc.: 2d4
Alignment: Neutral
Movement: 25’
Armor Class: 6 or 4*
Hit Dice: 1+2
Attacks: 1 or 2*
Damage: 1d6+1 (short sword) or 1d8 (repeating crossbow)
Special: may attack twice per round with repeating crossbow or drop their crossbow to use a shield for better AC
Save: F1
Morale: 10

Mauriatown’s shock troops, the blueshirts are sent to where fighting might be fiercest, as well as to harden any vulnerable positions and locations.  Bred for strength and toughness, they have little to say, except to follow the commands of the Leader.

Philosopher-Kings presaged by the Great Prophet Plat, Maurian Wizards are the masterminds behind founding, maintaining, and expanding Maurian society. Together they form the highest caste in Mauriatown, with the Leader as their pinnacle. Though the Wizards remain secretive to the extreme, their power and presence can be felt throughout that land, whether through potent ‘M’ symbolism, the Leader’s edicts, or not.

Though allowed to remain under Maurian protection, some gnomes tire of constantly having to toil in the fields and bow to Maurian passers-by. Instead, they sometimes go ‘Gnome-Crazy’ and begin to riot, set up ‘Revolutionary Gnome’s Committees’, and/or  flee to other lands. That such uprisings are almost never successful is well-gnome by all.
Posted by Dan Osarchuk at 3:38 PM No comments: 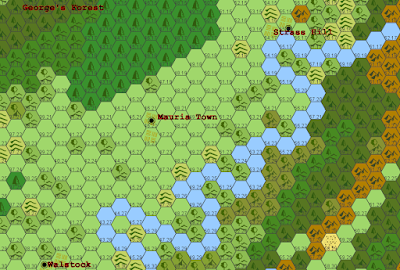 While moving about Mauriatown ‘on official business’ can be relatively safe and easy, moving about Mauriatown while ‘not on official business’ isn’t. The area is heavily patrolled, not only to keep out invading monsters and humanoids, but also to suppress the work of spies from rival settlements, (especially Helltowne) as well as to keep down any pesky gnomish uprisings.

ZONES
Mauriatown has a variety of area types to which the locals refer to as ‘Zones’. Though their land is often characterized as being dominated by ‘militaristic humans bent on killing all other races, each area demonstrates its own local flavor of that stereotype.

Mighty One Trail
The main thoroughfare of the Vale and therefore Mauriatown, many still travel this age old path, just as the Ancients did in centuries past. Though folk may no longer hurtle down the roads in their magic drive-cars, it remains a good trade route and method for adventurers to get to other lands quickly, even if it is only now via horse and foot.

1d8
1-3. 1d10 Foreigners from (roll 1d12):  1. Middlechest (a feudal monarchy), 2. Stephania (an amazon matriarchy), 3. Strass Hill (viking warbands), 4. Columba Furnace (dwarf miners and smiths), 5. Fjord Vallee (human noble savages), 6. Caelum Mount (Olympian human magocracy), 7. Monjaksen (undead-overrun society), 8. Narquay (Frankish nationalists), 9. Timber Fell (Celtic hamlet), 10. Madisonburg (cosmopolitan duchy), 11-12. Other (per Referee). Wherever they may hail from, foreigners have a base 85% chance of traveling on ‘‘official business’. (Helltowners are arrested on site, though they sometimes pose as folk from other lands while spying on Mauriatown- a 10% chance of any Foreigner encounter actually being the case)

Elder Pike and other roads that wind through Mauriatown
Use the following encounter matrix instead:

Farmlands
Despite being a major industrial power (at least for the Vale during this period of history), much of Mauriatown remains farmland.

Clutch Houses
Following in the teachings of the Great Philosopher Plat, the Maurians do not have families per se. Instead, they are grouped together, based on the dictates of the Maurian Wizards, never really knowing who their real parents are. Such an arrangement certainly helps solidify citizens’ loyalty to Mauriatown, but also gives them somewhat of a sense of loss for never knowing a nuclear family. Children then forge close bonds with their clutch mates that include the same Caste (Greyshirts, Blueshirts, or Black Hats), as well as others they meet in the Leader Scouts that come from any Maurian Caste,

Town Holds
Including Old Mauriatown in the south, Brookstown further north, and Exitia to the west of that, these hamlets give Mauriatown the appearance of having a similar arrangement to other lands, though they are mainly locales for the manufacture of Maurian arms and other equipment, as well as fronts for the Maurian Secret Police, rather than being any actual social entities of their own.

(Secret Bases)
Though they officially aren’t supposed to exist, a number of secret bases are rumored to be found throughout Mauriatown, offering anything from keeping their land on the cutting edge of arms, working their strange magic, and especially keeping their gnomish slaves in check. How else will they keep their society together?

1d6
1. Weapon development
2. Maurian Wizard Temple
3. The Leader’s Headquarters (one of many)
4. Secret Weapon (too secret to even describe)
5. Other (per Referee)
6. Gnomish torture black site (don’t ask!)

Coliseum Park
Once a great reserve of the Ancients, the Maurians have converted the place to a spectacle of blood and valor. Here the various castes of Maurian society can compete for the privilege of having the Leader wear their color as his uniform for a time (if he is so inclined, of course) not to mention practice using the more unusual Maurian weapons on each other. Rebellious gnomes can even attempt to win greater (temporary) rights in gladiatorial combat- a true extravaganza to behold..

Posted by Dan Osarchuk at 4:00 PM No comments: