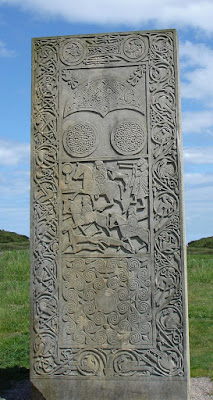 Spells (Gruagach)
Sorcerers of Gruagach have access to the following spells.

Note that as Pictish sorcerers, they must achieve one higher class level to cast their spells than clerics of other gods do and also have a 3 in 6 chance of being able to cast each of their spells an extra time per day. Last, they have a 1 in 20 chance of having one of their spells accidentally go off when stressed (see Pictish Sorcery in Part I for details).

5th Level: Atonement, Commune, Cure Critical Wounds, Dispel Evil, Flame Strike, Insect Plague, , Pictish Geas (as Quest, though the compulsion can be to right any wrong, rather than  just undertake a quest), Plane Shift, Commune with NatureD, Transmute Rock to MudD, Cone of Sun (as Cone of Cold*, but does 1/2 damage and causes blindness to targets- save vs. spell negates; double damage and no save though to beings that hate sunlight)

6th Level: Animate Objects (by connecting with their spirits), Find the Path, Heal, Speak with Creatures, Stone Tell, Summon Aerial Spirit (can be used to summon Fey or Totemic spirits)

Pictish Druids
1. Replace select cleric spells with druidical ones, especially ones that involve plants and animals
2. Replace club, staff, spear, sling, or rocks with the sickle (scimitar) as one of the allowed weapons
3. Replace Turn ability with a 1st-level druid spell that can be cast at will (see Volume II for the list)
4. Can also have them experience some or all aspects of Pictish Sorcery, making them truly distinct from other types of druids

Pictish Shamans:
1. Replace select spells with the ones listed for shamans (see Volume II)
2. Lose the ability to Turn- instead can become ethereal for up to one round per day per level
3. And as with Pictish druids, Pictish shamans can still experience some or all aspects of Pictish Sorcery, making them truly distinct from other types of shamans

Pictish Warriors
Wild and wiry like their sorcerer counterparts, Pictish warriors happily don woad paint, run around in barely any clothing (or even none), and scream at their foes in thick accents that few non-Picts can understand. They thus can add 1 per odd level to any combat-related roll each round when doing so (+1 at 1st level, +2 at 3rd level, etc.) or even 2 per odd level to a non-combat related roll that involves being rustic or somehow involves spirits (whether intoxicating or ethereal) (+2 at 1st, +4 at 3rd, etc.). On the other hand, they will never use any armor (except for shields) and also experience the standard -7 penalty to all Charisma checks made with non-Picts for wearing woad paint, though they might be too busy screaming to even notice. 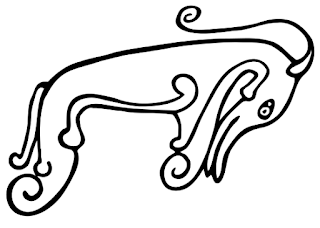 Pictish Beasts
These amorphous, horse-like beings are highly respected by the Picts, appearing on much of their art. Pictish beasts are at home both in the water and on land, and also mix elements of the fey and totemic spirits. As a result, they are able to blink at will (as per the spell) and can each also empower up to one worthy Pict at a time, though they are also fond of eating Picts and other mortals when hungry enough (a base 50% chance whenever encountered).

Next week, we explore followers of a Finnish deity!

Posted by Dan Osarchuk at 3:59 PM No comments: 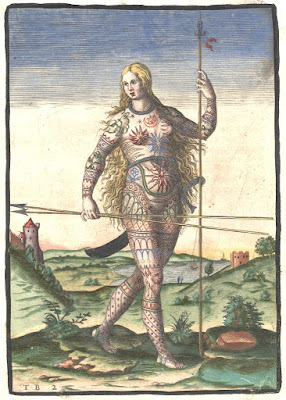 Are Ye?
Gruagach might give ye a kick in ye arse, but are ye fit for what ye’re yearnin’? Are ye wild? Are ye a-seekin’ the sun and cattle? ARE YE?

Divine Tests
1-3. Up to ye oxters, are ye? Well then, ye must haud on, aye, or even faster yet, get in ye skuddy, woad, er steamin! The sorcerer must do nothing for 2d6 turns, or for only 1d3 turns if he can go nude, become painted, and/or get drunk.

4-9. Lost ye micht, have ye? Eh? Well then best ye get from all ye’re haverin’! The Gruagachan experiences a reduction in spells available- 50% chance for each one- possibly including his Turn ability, for the rest of the day. Roll 1d6 for each spell lost to determine what he needs to do in order to regain it before then:
[1] Get at least 1d6 others to be nude, woad-painted, and/or drunk for at least the next 1d3 hours (a base 25% chance that they will agree; 75% chance if they are also Picts).
[2] Acquire at least 2d6 cattle or sheep, preferably by raiding
[3] Hit an ally or other worthy (current) non-enemy with at least 1d3 rocks. Each one does 1d4 damage and the target is free to throw them back. Tossing logs or even trying to drink rocks will also do in this case, though they each cause 1d12 damage, also restoring 2 extra spells if lost.
[4] Make an offering to the fey or other spirits, based on the nature of the spell lost (per Referee). There’s a base 25% chance of the spirit being encountered to accept the offering. See Touch of the Fair Folk (Healing Side-Effect results #5-6) for its disposition.
[5] Work on a stone carving or pictograph, requiring 1d6 turns and a Wisdom or Charisma check at its conclusion to see if it‘s good enough.
[6] Get to a broch (stone roundhouse or fort), or work on building one or another stone structure for at least 1d3 hours

10-12. Dinna ken who’ll gie ye a skelpit lug this time, will ye? Gruagach is just one of many Pictish divinities who also have a great deal of overlap due to their animistic ways. As a result, rather than experiencing Are Ye? in this case, reroll and consider the test to be for one of the following similar divinities instead (1d5):
[1] Brighde (as Brigid)
[2] Cailleach (as Trivia)
[3] Cern (as Cernunnos)
[4] Mhanainn (Manannan)
[5] Scathach (as Morrighan)
[6] Arcaibh (as Orcus- but is entirely Pictish in character, rather than orcish, also incorporating boars and the fey, rather than evil spirits - i.e. ‘the Orkneys’)
All are detailed in Volume II. The Referee should feel free to adjust any results to make them more ‘Pictish’: rustic, wild, and animistic.

13-17. Noo jist ye haud on! Many stereotypes exist for the Picts, and the sorcerer of Gruagach now takes on one of them- roll 1d4 each time to see which one:
[1] Battle: from now on, whenever provoked, the sorcerer must save vs. paralysis or have to fight. The save becomes 2 harder for each instance of this test.
[2] Babble: the sorcerer gains a +1 bonus to all saves, but others must also make a save vs. spell to understand anything he says at all from now on. The bonus increases by 1 and the save becomes 1 harder every time he experiences this test.
[3] Thrifty: Picts wear and carry little anyway, but now the sorcerer will often refuse to wear any garments at all or purchase items, even needing to save vs. paralysis if doing so would protect him from the elements or the like. The save becomes 2 harder for every time he has this test.
[4] Swalla: as per Lure of the Vine- see Dionysius in Volume I- though whisky will always be preferred to other spirits.

18+ Not afraid of ole Nessie, are ye? A great and terrible Loch Monster arrives within 1d20 rounds to show Gruagach’s displeasure, its long neck allowing it to even find him in the most unlikely of places. It will attack for 2d3 rounds, plus 2d3 additional rounds per Are Ye result over 18. Those who intervene or otherwise aid the sorcerer will become potential targets too, also increasing the Loch Monster’s fury for 1d3 rounds longer per ally involved. In any case, the sorcerer (and any allies brave enough to fight) must keep their heids and gie it laldly- ach!


Posted by Dan Osarchuk at 3:47 PM No comments: 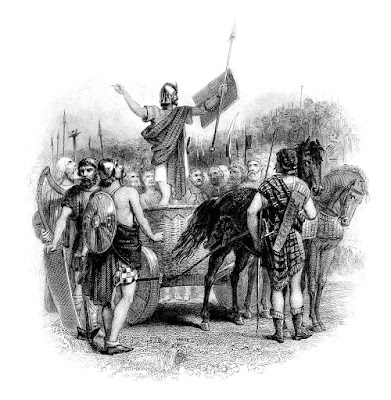 Healing Side-Effects (Gruagach)
Gruagach naturally benefits Picts most of all, though those like them may receive assistance too. And, as with most Pictish deities, those who experience healing from his sorcerers at a node or other natural place of power can reroll their side-effect if they wish, though they must take the second result; that is, if they can understand what it means!

1-2. A Raid Will Do Ye: Ye must be acquiring some cattle or at least some sun to get ye health back! (Both might be a challenge in Pictish lands- unless already available, generally requiring 1d6 turns of work and only having a base 50% chance of success.)

5-6. Touch of the Fair Folk: Circle ye seven times or else get ye a charm-stone (a Pictish painted stone), ‘ere you receive good health today. But bear you in mind, that you might find, also a visit from the fey! (A base 33% chance of a fey being showing up along with the healing: the being will either be- roll 1d4: [1] helpful, [2] mischievous, [3] alluring, or [4] hostile- in any case remaining for 1d20 rounds.)

7-8. Caledonian Cure: Ye be one of the hard feet, are ye? Eh? EH?!  Dwellin’ on the rocky ground, being tough or just plain stubborn ‘round, sets one free. If nay, dinna fash yersel! Get yer healin’ anyway. If aye, a-plenty more fer yer to see! (Healing happens and with a 50% extra benefit if the recipient is ‘hard-footed’.)

9-12. Blessing of Gruagach: Curin’ is hoachin' and even grants ye more fer the lot of them!  (The patient automatically receives healing for the full amount, along with a +1 bonus to all rolls for the next 1d6 turns if tattooed, wild, nekked, raiding, or what have you- up to +2 if more than one apply.)

Posted by Dan Osarchuk at 4:17 PM No comments: 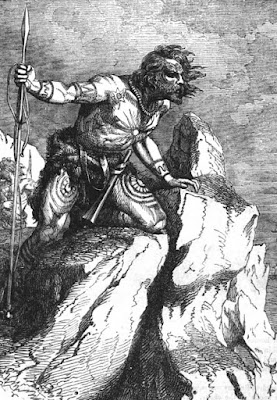 Next week: Sorcerers of Gruagach (Part II)!
Posted by Dan Osarchuk at 3:46 PM No comments: