POLITICAL STRUCTURE
In the land of Mauriatown, the Leader and his servants rule supreme. Yes, the humans there are safe from most invading orcs and goblins, rampaging monsters, and supernatural threats, but they must also obey the Leader and belong to one of the Maurian castes. And it is only humans that are welcome: all others must serve as slaves or become banished, though the Leader has been known to make exceptions for specific individuals, those who might better assist Mauriatown, from time to time.

Whatever the case, the Maurian ‘M’ device is displayed prominently throughout Mauriatown, whether on hat, helm, armband, or flag. 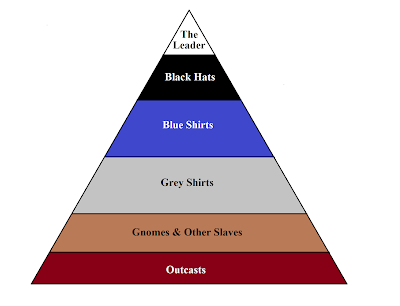 The Leader: The Leader himself is a mysterious figure, always keeping his face obscured by some hood, cowl, or other mask. His dictatorial rule is followed without question or at least, without obvious defiance by his subordinates. Depending on the Leader’s mood and which caste he wishes to support at the time, he has matching uniforms in various colors: black, blue, grey, and even red and violet for some reason, though his main color of choice is that of white.

Some might whisper that the Leader is then prone to impersonation, since so few actually have seen his face, but his very direct and charismatic demeanor certainly marks him apart from all others, as well as his very eccentric accent and apparent magical abilities.

What is more, the Leader is sometimes surrounded by a cabal of Maurian Wizards who remain silent and yet are dressed in a similar manner to him, albeit with far less medals and marks of rank. He also has certain unique advisors, as well as the four castes below him, and his personal unit of crack Black Hat personal guards.

Black Hats
The elite caste of Mauriatown, the Black Hats serve as leaders of their society, beneath the Leader himself, of course. As such, they dress in black uniforms with tall, black boots. Officers wear tall peaked, black caps and soldiers wear simple, black caps or helms. Both are armed with crossbows and swords, though officers wield crossbow pistols and long swords, while soldiers use repeating crossbows and short swords. Neither wear any armor, but due to their superior intelligence and athletic ability (for which members of the caste are selected), they are skilled enough at dodging attacks.

Blueshirts
Intermediate, Blueshirts are the main warrior caste in Mauriatown, though of course, all castes are expected to fight. Blueshirts dress in blue uniforms, naturally enough.  Officers wear peaked, blue caps and tall, black boots and soldiers wear simple black helms and balaclavas. Unlike the other castes though, they bear light armor and shields, since they are selected for physical strength and endurance. Still, they do wield crossbows (pistols for officers; repeating for soldiers) and short swords like the less numerous and more skilled black hat soldiers.

Greyshirts
The worker and farmer caste, Greyshirts run most of the day-to-day tasks of Maurian society. Though they have very few officers, the vast majority wear their grey uniforms whether tilling a field, crafting a house, or lining up for battle.. Whatever the case, when called to fight, they wield cudgels and light crossbows and are used  en masse, since the only requirement for being a Greyshirt is being fully human and swearing allegiance to the Leader.

Gnomes & Other Slaves
Mauriatown is a place for humans only. When so many threats exist for humans in the Vale today, it isn’t surprising that so many are willing to give up some freedoms in order to gain a great deal of safety. What may be surprising is that non-human races would be willing to live in such a society. The vast majority of these unusual types are gnomes, since they are often unable to defend themselves against other threats, so they accept slavery amongst the humans in Mauriatown. Nevertheless, rumors of a Gnomish underground cannot be discounted.

Outcasts
Those humans who fail to follow the Leader, as well as those non-humans who fail to accept slavery, become outcasts from Mauriatown. Despite the (not completely untrue) propaganda of the Maurians being heartless murderers, they often (at least try) to banish offenders from their land before killing them. Of course, any who attempt to return are then executed in one of the very imaginative ways of Mauriatown (detailed next week).