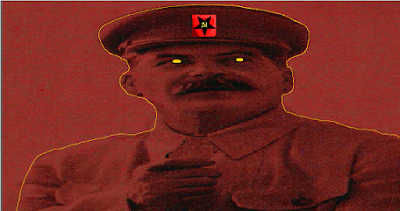 Tenets of Uncle Steel Dwarf
* Everyone must become Equal, or else!
* All possession and distinction must become Merged!
* All who are Counter-Revolutionary must be Purged!
* Liquidate others as needed, as well

Commissars of Uncle Steel Dwarf
Special: Uncle Steel Dwarf is not served by clerics (since they espouse ‘Opiates of the Masses’), but rather by commissars. Most are red dwarves (see Part IV), but there are also a fair number of humans and members of other races in their ranks.
Allowed Weapons: Hammer, sickle, firearm (see below)
Allowed Armor: Leather or lighter
Holy Symbol: Hammer and sickle within an inverted star
Can Turn: Those who believe in freedom
Equalitarian Firearm: Up to thrice per day per level, a commissar of Uncle Steel Dwarf can emit a blast of fire and steel from his firearm at a target up to 60’ away, causing 2d6 damage if it hits. In addition, it does double damage to any allies that are retreating or trying to surrender.