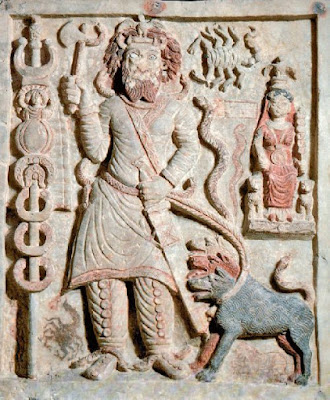 17th in the Divinities and Cults: Volume III series (two more to go!), we have Nergal, Mesopotamian arch-devil of the deep state and corruption.

1d12
1. The presence of Nergal is felt with a violent death. Depending on the situation, the party either stumbles across the corpse or receives news of it soon. Roll 1d4: [1] a random NPC the party knows, [2] an unknown man, [3] a monster or other potential threat to the party, [4] an NPC in the party (if any).

2. With a disturbing roar, an evil black lion leaps out to attack! Roll 1d4+3 to determine its HD and it only has a base 25% chance of being cowardly.

3. Ever given to subterfuge, Nergal tricks one of the party’s clerics into thinking that his clothing is not up to par, like he once deceived Marduk. As a result, he or she cannot use any cleric spells or abilities for the next 4d4 hours, even if such comments are only in Erra.

4. 2d4 lion men have taken over the area, doing their malevolent best to slay any potential rivals as they are wont to do. Even followers of Nergal aren’t immune, unless such followers can find a way to corrupt the lion men (a base 66% chance).

5. Plague and famine have afflicted here. All those encountered for the next 2d4 hours are sick and weak, having only 1/2 their normal hit points and suffering a -4 penalty to all rolls. And though the party will find it hard to find food and comfort, followers of Nergal and other Fell Lords that deal with such tragedies are immune.

6.  Like Ereshkigal did with Nergal, a female NPC ends up with a diabolic, underworldly type. He is either a (roll 1d6): [1] lion man, [2] orc, [3] fighter who follows Nergal, [4] cleric of Nergal, [5] sorcerer of Nergal,
[6] reroll twice to generate a multiclass adversary. Whoever it is, the party will have to be the ones to rescue her from such a bête noire.

7. Fire! Whether from devilish machination, scorching sun, or insidious hellfire, the closest target in a random direction from the center of the party ignites, causing it 2d6 damage and 1d6 damage to all within 5’ of it. If the target happens to be a party member, then Nergal only cackles more loudly.

8. What looks to be a black cockerel crows at the party from upon its own dunghill. It is actually a/an (roll 1d6): [1-2] arrogant rooster, [3] black cockatrice, [4] polymorphed lion, [5] polymorphed lion man,
[6] polymorphed cleric of Nergal. In any case, this rooster just might snuff them.

9. A nearby official has been corrupted, but Nergal’s minions remain paranoid over ‘slavic trolls’. The official is a (roll 1d6): [1] watchman, [2] toll keeper, [3] tax collector, [4] royal agent, [5] cleric, [6] noble, though the ‘trolls’ only have a 33% chance of being real. If so, then they are simply citizens attempting to fight the corruption. Otherwise, they’re only the minions’ paranoid delusions.

10. Perhaps not a king of lions, a giant lumbers into view that will certainly scare the heck out of humans- a humbaba! If they have somehow defiled his forest or otherwise angered him (a base 66% chance), then he will attack with roars, claws, fiery breath, and his dreaded snake phallus!

11. War! Factions in the area have given in to Nergal’s machinations and are now fighting to the death. Roll 1d6 twice to determine what the sides are: [1] Nergal followers, [2] Marduk followers, [3] other humans, [4] lion men, [5] black lions, [6] black cockerels (see #8 above), [7] ‘slavic trolls’, [8] roll again- a third side is fighting. There will be at least 4d6 of each side in the immediate area; 2d6 if the side is comprised of animals or monsters. In any case, the party has a base 50% chance of getting caught up in the fighting, if not all the accompanying arguments too.

12. Nergal’s realm is deep below, hidden from illumination, hope, and accountability. The party encounters such a deep state as well in the form of a (roll 1d6): [1] series of tunnels, [2] cavern, [3] thieves guild, [4] secret police enclave, [5] cultist hideout, [6] official’s quarters.