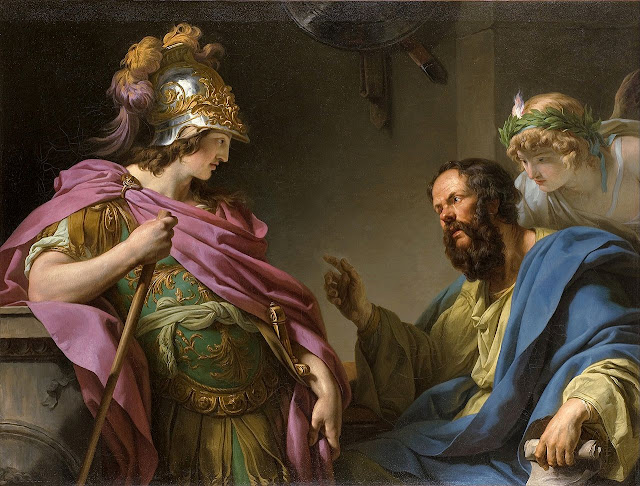 Philosophers
Masters of metaphysical debate, treat as clerics, except that they:
- Fight as magic-users, using their HD, 'to-hit' bonus, and inability to wear armor.
- Follow a philosophy which grants them additional advantages (see below).
- May have gods & goddesses as patrons too, namely Zeus, Apollo, Hermes, or Athena, while some foolishly doubt they even exist!
- Make philosophical points rather than cast specific cleric spells. These "philosopher spells" can be cast even when it's not their turn, but are all the same- they can only be used to cancel out other spells, magic items, and powers of supernatural beings. This ability is due to the philosopher using reason (and arguing) to disbelieve magic and supernatural powers, even non-illusory ones. The level of the philosopher's spell will cancel out any other spell, magic item, or supernatural ability of the same level, dweomer, or HD or lower. For example, a 3rd level philosopher can use one his second level spells to counteract a 1st or 2nd level spell, the bonus from a +1 or +2 weapon, or a supernatural ability from a 2 HD being or less that's used against him. Once cast, the philosopher's spell will make it as if that instance of magic or supernaturalness never happened to the philosopher, and he won't be even aware of it (even if his allies are still affected), believing those who so to be delusional.
- Can attempt to turn magic-users, supernatural beings, and even philosophers who follow different philosophies, just like clerics can attempt to turn other beings that are antithetical to their god or goddess. Philosophers call this 'rebuking' and involves debating with the target until it is repelled, whether out of intense frustration or some more metaphysical reason.
- Cannot be affected by beneficial magic or supernatural ability, though they can still be harmed by such things if they don't have enough philosopher spells left that day to counteract them.

Classical Philosophies
Some examples include:

Socratic: questioning all, philosophers of this type wish to guide others too, allowing any in their presence who are affected by magical or supernatural effects to save vs. death to be able to ignore them as well, along with the philosopher when he uses one of his philosopher spells. Those in their group who fail to save will of course be seen as having delusions.

Platonic: believing in a strict hierarchy for society and metaphysical form, those who are successfully rebuked by these philosophers must save vs. death or cannot use their magic or supernatural powers for the next 1d4 hours too.

Aristotlian: being more empirical and practical, such philosophers can use their philosopher spells to counteract other spells, dweomers, and supernatural powers that are 1 level higher. Thus they could use one of their 4th level philosopher spells to negate a 5th level spell, a +5 magic weapon bonus, or a power of a 5 HD being or less when used on them.

Stoic: emphasizing virtuous self-control, philosophers of this type also enjoy a constant 1d4 x 5% magic resistance ability that is rerolled each day. This amount reflects how wise, just, courageous, and temperate they are being, though the Referee should feel free to adjust it as needed if the philosopher is actually being more or less virtuous than the die indicates.

Epicurean: espousing measured pleasure, these philosophers can actually benefit from magic and supernatural ability, though they can't use their philosopher abilities for 1d20 turns afterwards if they do.

Skeptic: doubting all, such philosophers suppress all magic and supernatural ability in their presence. All (friend or foe) must save vs. death to be able to even use them in their presence, but once successful, they may do so again without needing to resave. But since skeptics doubt their own abilities too, their philosopher spells only work on spells, dweomers, and supernatural beings that are 1 level lower or less.

Myrmidons
These warriors harken from mighty ants given human form. As such, myrmidons are skilled at overcoming enemy warriors. Treat them as fighters who can add 2 to their rolls to hit, damage, or even to improve their AC when faced with a foe who has just used a special ability against them (or attempted to use it). What is more, this bonus increases by 2 for every odd level the myrmidon has thereafter. For example, if a 3rd level myrmidon were fighting a hoplite who was using spear or sword and shield against him (or some other maneuver) for a special bonus (detailed in Volume I), then the myrmidon could respond the following round with a +6 bonus of his own! The hoplite may have to rely just on his normal attacks provided by his fighter level and attribute bonuses (if any) to defeat the myrmidon instead.

In return for being able to use this mighty boon, myrmidons must bear short swords and shields as their primary weapons, wear a certain style Greek armor to easily identify themselves (usually dark) whenever possible, and obey their Achillean superiors to the death.

Most myrmidons serve Zeus and his clerics, though followers of other Olympians can call upon their aid when facing non-Greek foes, especially Trojans.

Peltasts
Light, skirmishing warriors, peltasts are skilled at hurling their javelins and then escaping counterattacks. As a result, if there is enough room, then they can make a Dexterity check with a +1 bonus per level to avoid a resulting melee attack when fighting in this manner. If successful, then they end up 1d3 x 5' away from the attacker at the end of the attacker's turn. For example, a 3rd level peltast could make a Dexterity check with a +3 bonus to try to run away from a charging hoplite that he just hurled his javelin at. If he does, then he will end up 1d3 x 5' from the hoplite; that is, if there is somewhere to escape to.

To allow for such maneuverability, peltasts cannot wear any armor heavier than leather and can only bear pelta shields. The latter only grants a +1 AC bonus  vs. one foe per round, so it behooves peltasts to get out of the way after attacking their foes!

Peltasts generally worship divinities associated with ranged attacks, such Apollo and Artemis, or rustic deities, such as Pan, Dionysus, and Hermes. 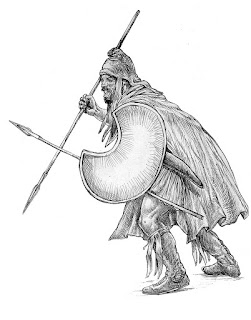