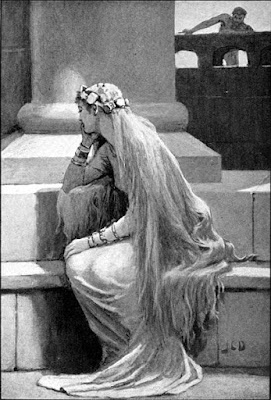 Divine Tests (Sif)
Whether fair locks or wholesome grain, things may only grow to be reaped just the same. Nevertheless, they can still be enjoyed in Sif’s name.

1-4. Loki strikes, shearing off all of the cleric’s hair! She takes 1d4 total damage along with a penalty to her rolls equal to the divine test result (-1 to -4). The former can be healed with normal rest, but the latter can only be reduced by 1 for every day that her hair isn’t shorn again.

5-9. The fair wife cares for husband and family, while the fair field provides for them all. To grasp it better, the cleric loses access to some of her spells (50% chance for each one) including possibly her turn ability. She must fulfill one of the following tasks in order to be able to use each one again. Roll 1d4.
[1] Spend at least 2d2 hours caring for her husband and/or family.
[2] Tend to a field for 3d4 turns.
[3] Hit a foe in combat with her sword.
[4] Get at least 3 strangers to compliment her hair, fidelity, and/or her serving abilities (requiring successful Charisma checks).

10-14. Sif blesses her cleric with a permanent change, bringing her even closer to her goddess, but also some new challenges too. Roll 1d3.
[1] Goodmother: The cleric can no longer initiate attacks (though she can still certainly attack if she or her love ones are attacked first). In return, all of her children gain 1 level of fighter.
[2] Golden Locks: As with Sif, the cleric’s hair turns to actual gold, granting her a +2 Charisma bonus, but also making her a tempting target for thieves (since her hair is now worth 1d6 x 100 gold pieces), as well as bears and critiquing the temperature of porridge. If stolen, then not only is the bonus gone, but also 6 other Charisma too until it is made just right again.
[3] Land Held: The cleric’s property becomes fertile and abundant for the rest of the season, needing little care, though she herself becomes a landvaettar (nature spirit) for the next 1d3 days. During this time, she is quite potent, but unable to leave the place where this test occurs. See Volume I for stats.

15-17. None may gawk at the Wife of Thor! Similarly, any man who looks upon the Sif cleric with longing (and isn’t married to her), will be met with a mysterious hammer strike! For the next 24 hours, those who notice her and fail a save vs. spell (made 1 more difficult per her Charisma bonus) will suffer 1d8 damage.

18+ Much will be lost when Loki takes, but new wonders can also be returned in their stead. The cleric loses all her hair and powers for 1 full day per divine test total over 17. Once that concludes though, she receives an item along with the rest that can then be given to her love ones. Roll 1d4: [1] a +1 spear,
[2] a canoe that can be shrunk to pocket size, [3] a pet boar with a golden hide, [4] a +1 warhammer.