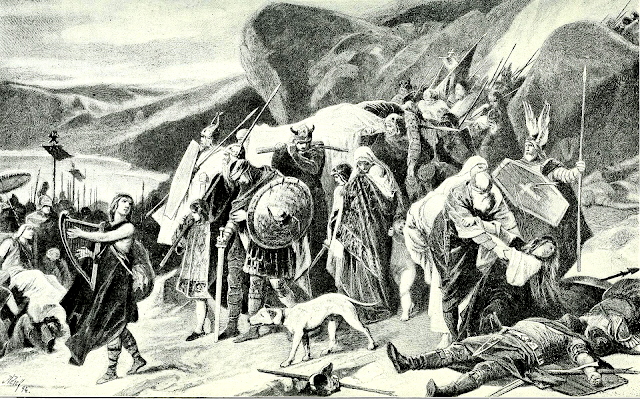 Like with the Saxons, use either the Germanic tables in Volume II or the rules detailed below to create Gothic clerics, following Gautr, Fairguneis, Fraujo, and the rest.

Gothic Clerics
Replace the Norse magical side-effects with Gothic ones while still using the other rules for the equivalent Norse divinity. For example, a priestess of Halja would use Gothic magical side-effects to cast her spells along with the tenets, allowed weapons, holy symbols, mysteries, divine tests, and spell lists for Hel.

Allowed armor can be heavier, up to scale mail, banded, or even plate. For beings the cleric can turn, replace one or more of the Norse ones with the following Gothic monsters: vampires, werewolves, witches, and ghosts. Note also that Goths are more skilled horse-raiders, unlike the Norse, who are more skilled at sea raiding.

Last, monotheistic Gothic clerics can follow the rules as discussed in Volume I and also have two more of their magical side-effect results be considered Generic Casting instead: one that’s less than 6 and one that’s greater then 8, For example, clerics of Teiws would ignore side-effects #2 and #9, since he is a Lawful god. On the other hand, clerics of Lauguz would ignore side-effects #5 and #10, since he is Chaotic

Gothic Magical Side-Effects
Dark honor and going forth: do magic for the folk, but beware of fell spirits!

1. Blotan: What would you offer for this magic? A sacrifice worth at least 1d6 gold pieces per spell level or a captive of any price will do. What won’t is an offering of weapons though- those are needed for fighting!

2. Hex: Is it the will of the gods or something sinister? There is a 50% chance of the spell being granted by the latter, in which case the magic only has 50% of its normal effect unless it is a spell that does harm.

3. Gothic Realm: The magic now requires the cleric be in an area which is dark, grim, has tall arches, or he or she must be so clad at least. Such is the way of Gothdom and the magic will only happen once such conditions are met.

4. Mysterious Cast: The spell is all but invisible to the naked eye and its effects occur only 2d3 rounds later.

5. Ride Forth, Reiks! Who will protect the folk and maintain the ancient ways? If the cleric’s spell would help to do so, then he or she gains +1 to all rolls for 1 round after it is cast. If not, then the opposite is the case.

6-8. Generic Casting: The spell works without side-effect for now.

9. Unseen Ones: Spirits influence the spell to have a 50% increase in its effect, range, or duration. Still, what is their true purpose? If evil, like those who would mate with Haliurunnae witches to spawn the vile Huns (a base 33% chance), then the cleric will take a -4 penalty to all rolls for the next 2d6 rounds for having such a vile association.

10. Ancestral Vengeance: If the magic is meant to avenge one who has wronged the cleric or even his or her people, then its effect, range, or duration can be improved by 50%.

11. Conqueror’s Way: Great glory is to be had for the cleric who is mounted or in an area which he or she has invaded. If that is the case, then the spell works for double its effect, range or duration, as well as it not being expended that day. In addition, if it is meant to help its target, then they gain a +6 bonus to saves vs. fear and for rolls made against those beings that the cleric can turn. This latter benefit lasts for the next 1d3 turns.

12. Dark Bargain: The spell can be cast for triple its effect, range, or duration, but only if the cleric pays the proper ‘tithe’. If the bargain is struck, then in return the cleric (roll 1d6): [1] is tormented by haunting visions for the next 2d6 rounds, suffering a -5 to all rolls, [2] causes the next woman he or she looks at to faint, falling unconscious from fright for 1 minute, [3] loses his or her mount to a strange demise, [4] requires solitude for the next 2d3 turns, ending it early only if a grave threat is at hand, [5] is attacked sometime within the next 3d6 rounds by some Gothic horror, taking 1d3 damage to a random ability score each round for 1d3 rounds, [6] loses his or her lover, lamenting their passing forevermore.

Next week: we begin our series on American divinities!