Clerics of Columbia, Part I 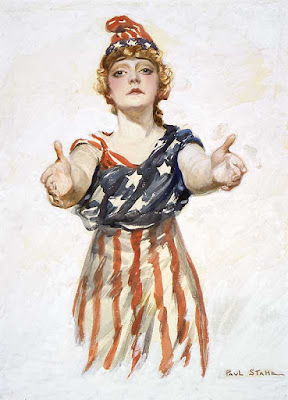 Clerics of Columbia
Special: Columbia is served by clerics, priests, and witches.
Allowed Weapons: Torch-shaped mace, sword
Allowed Armor: None
Symbol: Stars, Stripes, Her Holding a Torch
Can Turn: Those who are against liberty (if unknown, a base 33% chance)
Mysteries of Columbia: Clerics of Columbia can add 2 to one of their rolls, attributes, saves, or AC bonus for 1 round when acting secretly or when using secret knowledge, up to once per day per level. Since she’s only a semi-deified spirit of place though, Columbia’s mysteries work just 75% of the time.

Magical Side-Effects
Being a semi-deified spirit of place, the magic of Columbia works differently at various locations. Such magical side-effects can be rolled each time her clerics cast a spell or, since she is a Lawful semi-deified symbol of place, they can be determined beforehand each day instead. In the latter case, each spell would have the same side-effect all day long, allowing the cleric to thereby plan ahead.

Roll 1d12. Depending on where the cleric is at the time of casting, it may either grant a positive or negative effect. If neither location applies, then the spell has no side-effect.

2. Amber Grain: amongst grain, whether harvested or still in the field, the cleric’s hair turns amber and wavy (+2 Charisma for the next 2d6 rounds). In a dismal place though, she suffers a -2 Charisma penalty.

3. Purple Mountains: in view of mountains, the cleric gains an aura of majesty (+2 Wisdom for the next 2d6 rounds). Within view of a pit (with no mountains in sight), she takes a -2 Wisdom penalty instead.

4. Fruited Plain: on a plain or amongst fruits, the cleric becomes more fruitful herself (+2 Intelligence for the next 2d6 rounds). On a very uneven surface or in a very sterile area though, she takes a -2 Intelligence penalty.

5. Crowned with Brotherhood: surrounded by allies, they gain a +1 to all attack rolls and saves for the next 1d6 rounds. Surrounded by enemies, they get the attack bonus instead.

7. Early Light: in view of the dawn or something else that’s been recently lit, the cleric is able to act before anyone else the following round. If it is dusk, she misses her next turn instead.

8. Last Gleaming: in view of the dusk and/or something else that’s been recently snuffed out, the cleric can emit light for the next 2d6 rounds. If it is dawn though, she emits darkness.

9. Red Glare: in a battle, she can cause fear for the next round (save vs. spell negates). If not, she herself becomes afraid (no save), fleeing the area for the next 1d3 rounds instead.

10. Home of the Brave: in her homeland, the cleric becomes courageous (+2 to all saves for the next 1d6 rounds). In a foreign land though, she suffers a -2 penalty to her saves.

11. Sweet Land: where confectionary or other sweets abound, the cleric also becomes sweet (those who wish to attack her must save vs. spell to be able to do so for the next 1d3 rounds). At a place that is especially sour, all must save to not attack her instead.

12. Freedom Ring: at a place of liberty, all of the spell’s effects double. At a place of tyranny though, the spell has the opposite intended effect.

DCC RPG Conversion notes:
Referee= Judge
Can turn= Unholy creatures
Charisma= Personality
Wisdom= if not using the optional rule in Volume I, then use Luck instead
Save vs. Spell= make a Will save DC 15

Additional notes:
With some modifications, similar rules can be used for other spirits of place like Britannia, Frankia, and Germania. Of course, they would need different names, places, and results for their magical-side-effects. And, being around longer, those spirits of place may be fully deified and thereby not have the 25% chance of failure for their mysteries and other effects.