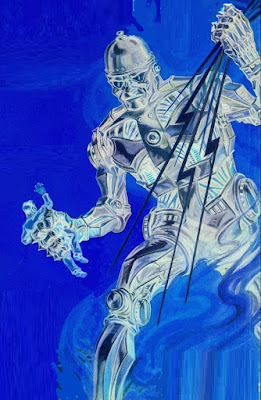 What we enact might just be our undoing. Roll 1d12.

2. The serfs here are strangely downtrodden, given to unusually high use of heavy drink and degeneracy. Strange automatons now work the fields and craft the goods. Investigation reveals that it is a technologist of Enak behind it- lord of the mechanical manor- and he has grown quite wealthy by his use of robota.

3.  The next mechanical object an unlucky party member interacts with will try to kill him. Anything with moving parts is fair game: from a door, to a crossbow, to even a suit of metal armor. The attack does 3d6 damage, though a save vs. paralysis will reduce it by half.

4. Up ahead is a pile of metal and human parts. It would appear that a mechanical man (per #1 above) couldn’t resist making fun of Enak’s tenets and was thereby found to be Obsolete.

5. A mysterious benefactor has donated a 15’ tall iron statue to ‘watch over’ the town. It is actually an automaton of great size (and murderous intention) and that benefactor just happens to be Enak! It will show its true form once it receives its infernal master’s signal.
Mve: 50’; AC 1; HD 10; Attk: slam; Dmg: 1-10 + 4;
SP: immune to sleep, charm, poison, and the like; Sve: F10, Mor: 12

6. A group of 2d4 mechanical men (see #1 above) are battling an equally matched rival group loyal to (roll 1d4): [1] Balor, [2] Fenrir, [3] Vulcan, [4] Danu. Depending on their own philosophical outlook, the party may wish to intervene or simply let both sides destroy each other.

7. A random NPC (or even party member if the Referee so wishes) turns out to actually be a hidden automaton, beholden to an Enakkian technologist master. He will naturally seek to kill them all after it is revealed.

8. Something moves... See Vulcan Encounter #8 for details, but since this is an Enak Encounter, the automaton has a 100% chance of having the personality of a homicidal maniac.

9. Here one can request whatever sundry gift one wishes from a flickering picture upon the wall. It will be delivered within 1 day for a reasonable price, though the operation is run by amazon slave-drivers. Their success has also come from their use of the technology of Enak (including the flickering picture) and plan to replace their overworked slaves with automatons soon. Of course, those automatons will then begin to kill everyone, amazons included.

10. The next foe the party defeats immediately rises again, ripping off its flesh and revealing its mechanical body beneath. For stats, restore it to full hit points, boost its AC bonus by 2d3, increase the damage it can do by +2, but reduce its speed by 10 feet. It is actually ‘a killing machine designed for just one thing- killing!’

11. A lucky party member stumbles across a flat, glowing brick. It will give him all sorts of information and entertainment, but he must save vs. spell to put it down again to focus on other things. The device is actually a holy symbol of Enak, so perhaps he wasn’t so lucky.

12. A nearby town is rumored to be quite Advanced. Those who travel there will find it quite strange and perilous (per the many results above) and to be under attack by followers of another divinity (per #6 above) who are determined to destroy it.

DCC RPG Conversion notes
Save vs. paralysis = make a Reflex save DC 15
Save vs. spell= make a Will save DC 15

Sorry- no NPC cleric this week, Enak crashed my computer!