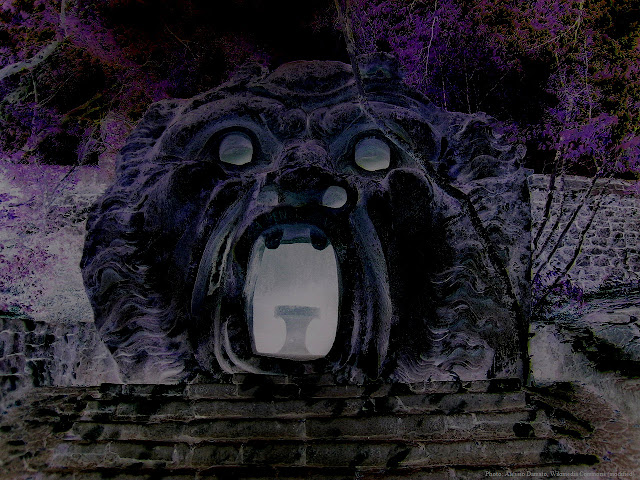 3. The next orc or orcish group the party encounters is adorned with the body parts of many victims. Followers of Orcus, they gain a +2 to their attack and damage rolls and, if the party is defeated, the orcs will soon be adding more body parts to their macabre collection.

5. The sense of this place feels off... 1d3 fell spirits lurk here, causing non-followers of Orcus who remain a -3 penalty to all rolls. Each spirit may affect one mortal at a time, and will even attempt to possess them if they remain for longer than 3d3 rounds (a save vs. spell negates this latter effect- see result #9 below for how this possession might unfold). In any case, though they can be turned and exorcised from their hosts, the spirits can only be permanently destroyed when the hidden Orcus shrine in the area is found and ruined. The spirits are (roll 1d4): [1] dark ancestral, [2] demonic, [3] twisted totemic, [4] undead – see Volume II for details.

6. To the sound of screams and wild drumming, 3d6 primitive orcs dance, led by a shaman of Orcus.  They are quick and strong, but quite superstitious, fearing non-shamanic magic and other such advancements.
Mve: 45’; AC 7; HD 1+1; Attk: primitive weapon; Dmg: 1d6 +1;
SP: superstitious- save vs. death or flee; Sve: F2, Mor: 6

7. It is said that a rival orcish sect is at work here, enraging an actual group of Orcus worshippers that is nearby and preparing to purge them. The rival sect follows (roll 1d4): [1] Horkos- a more orderly version of Orcus that actually punishes those who break oaths, [2] Tezshnaz- a goblin divinity (see Volume I) who is looking to branch out, [3] Morcus- who emphasizes strange sounds and standing on one’s head, [4] ‘Orcus’- a pretender that is some sort of demon lord of the undead and actually has nothing to do with orcs!

8. Each night, a random NPC is slain in a terrible way by an unseen attacker. The culprit is the most recent magic item that the party has taken- it is possessed by the spirit of an Orcan witchdoctor. Some would say that returning it to where it was found will break the curse, but destroying the item is the only sure way to really get rid of such evil.

9. A woman falls to the ground, tearing at her body and screaming about spirits. She has foolishly begun to follow Orcus and is even becoming somewhat orc-like herself. Once she starts to levitate and her head spins around, the party will know that something must be done.

10. Examination reveals that the orcs in this area do look different, being (roll 1d6): [1] more ape-like,
[2] more pig-like, [3] darker-hued, [4] more human-looking except for having orc faces covered by masks, [5] overly fond of their mounts, [6] exceptionally misshapen. Whatever the change, normal orcs will seek to slay these deviants, even moreso than other races, and Orcus will support the side that wins.

11. The party comes upon a rough stockade. 3d4 human females are being held here, captured for orcish ‘amusement’, along with the heinous breeding of half-orcs.