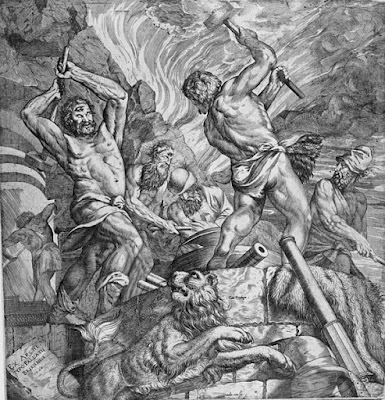 2. A nude man approaches and, unless a fan of such uncladliness, those who have to gaze upon him suffer a -3 to all rolls as he goes on about the ridiculousness of dress. Naturally, he is a Balorian devotee.

3. Suddenly, a random NPC decides to rebel against his agrarian lifestyle and bite a random party member for 1d4 damage. If he wasn’t a follower of Balor before, he is now; that is, if he survives the likely counterattack.

4. A corpse is discovered amidst a pile of ruined crops. The poor fellow looks to have been a farmer who has had his stomach ripped open and filled with fish and wild grains.  What sort of monster would do that?

5. The party hears an awful racket when they’re next inside a building. Investigation will reveal that it is 1d4 fomorians (see Volume II) trying to tear down such an outrageous insult to the old ways, led by an especially vociferous Balorian shaman. Depending on the building’s size, the attackers may soon accomplish their task.

6. The hills rumble and the skies dim as Balor’s unearthly legions march upon the Tuatha de Danaan. Such a battle is beyond the ken of most mortals to engage in or even perceive, though all followers of Celtic divinities along with those of Balor suffer a -3 to their spell rolls for the next 24 hours.

7. Rumor has it that a nearby lake is filled with treasure (actually 3d6 x 100 gold pieces’ worth). Of course, it’s also guarded by 2d4 followers of Balor (per #1 above), who will happily toss any who would come for such nonsensical currency into the lake too.

8. The trail up ahead is littered with broken bowls, bags, beakers, and other containers. Cast aside by an irate druid of Balor, there is a total of 1d20 items that can be recovered, each worth 1d100 gold pieces. They will also suggest the druid’s next target: he’s planning on smashing the ‘living containers’ of those who made them too.

9. A desperate farmer comes to the party for help. Nudist, luddite savages have hunted his cattle mercilessly, bringing him close to financial ruin. The culprits are of course 1d3 Balorians (see #1 above), though the farmer has no idea why they would have such a beef with him.

10. Without warning, all metal objects within 120’ begin to rust, becoming useless within 2d3 rounds unless the secret follower of Balor in the party’s midst (i.e. a random NPC, if any) is slain.

12. Behold the great eye! All in within 240’ must save vs. death to avoid getting destroyed by Balor’s gaze from afar. Such a spectacle lasts for the next 1d3 rounds, though followers of Balor are of course immune and will use this opportunity to chastise those who don’t follow the Old Ways.

DCC RPG Conversion notes
Save vs. death= make a Will save DC 10


Possessions:  Unholy symbol, club, sling w/ 20 stones, +1 leather armor, 43 gold pieces worth of trade goods (nothing made of metal though!)

Note: Wroid is currently statted as a human. To make him a fomorian shaman of Balor, adjust his stats per Volume II. His abilities can also be adjusted as that of standard shamans, which are also described in Volume II under Thrym.