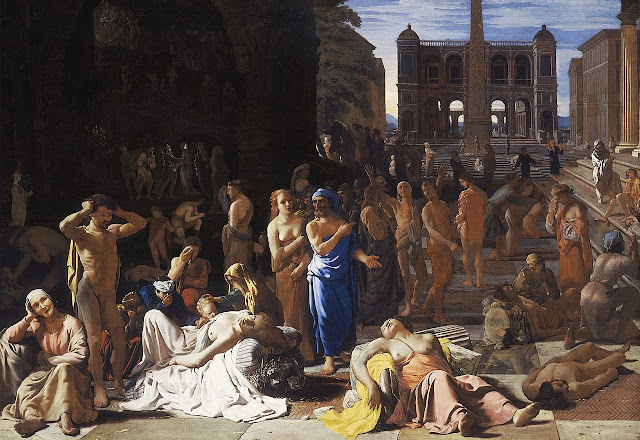 With the upcoming release of the Wyrd Ways of Walstock revision, here are various ways to update the adventure for returning characters who are crazy enough to experience such a wyrd place again. And if your characters haven't yet done so, then they should.

1. Walstock has become overrun with plague. A certain Professor Fausti describes the situation, whether directly to the party or via a speech that they overhear. He warns that it has a contagion rate of 11 in 12 and will quickly overwhelm the town. The party may find this to be true- those exposed must save vs. death or become infected. Those infected lose 1d4 Constitution and take a -1d10 penalty to all rolls each day. They must save twice for two days in a row to recover- unless, of course, they wish to risk healing at the Hospitalia (Location 25).

2. The Cult of the Shield Ghul secretly enjoys this since it makes them  'Indispensable'. Ironically though, most townsfolk have become too terrified to even venture into the Hospitalia for normal treatments, such as removing an ingrown toenail for 14,357 gold pieces a visit.

3. Whether the Cult of the Shield Ghul is actually responsible for the plague or not, they may have had aid from one or more of the following groups: Cult of Pan-demic (twisted Pan worshippers who seek an end to civilization- add them to Location 23), Cult of R'ti (corrupted tutors who enjoy having the Schoolhouse closed, but still receiving their wages- they're at Location 1), Cherno-Baba Yaga followers (who enjoy plague-slaughter, doom-suffering for its own sake- add them to Location T7).

4. All in town are expected to wear masks and encouraged to be Antisocially Distant. Those who don't are thrown into the Gaol (Location 14) where most of the resident criminals have no problem with getting very close.

5. Whenever encountered, Cultists of the Shield Ghul have a base 50% chance of breaking out into dance (not just the nurses in the Hospitalia). They claim it is to relieve the heavy burden of dealing with the plague, but it's more likely they're overjoyed they still have plenty of coin when many others do not (see #9 below).

6. Since the townsfolk, whether Trenchaus, Tochenorff, or other, likely won't enjoy seeing nurses and physicians dancing (rather than caring for patients), then they will be forced to watch them. Such 'Salutes to Heroes' occur at sunset each day in front of the Hospitalia and will likely infuriate the Minervan Superheroines (at Location 12), not to mention those others singled out for not attending.

7. Even travelers wishing to pass through the wyrd town of Walstock will be forced to remain, Quarantined for their Own Good. Never mind that will force travelers into more contact with the plague.

8. Most of the locales in town are closed. Investigation will reveal that those still open are, conveniently enough, faithful followers of the Shield Ghul. They include Walstock Tea & Knick-Knacks (Location 16), Chohmps’s Family Barber-Dentistry (Location 18), Town Crier’s Office (Location 20), The Hospitalia (Location 25), and the Apothecary (Location 27).

9. Many people are destitute. Without means of making gainful employ, they become impoverished, and are not above begging, pick pocketing, or even brigandage. Any not connected to the Cult of the Shield Ghul or having a Treasure Type of B or higher may attempt one of those three (per their alignment) on characters they encounter (a base 33% chance). They will do their best to be Antisocially Distant while doing so, but will also be hard to understand with their masks on.

10. Rather than advocate for the common folk, Town Crier Morell (at Location 20) derides any who would say that the plague isn't that bad as a 'Denying Alarmist'. A gang of 2d4 Assurance Cultists will confront such Deniers the following night in order to reinforced that point (with their clubs). Those on 'the 'Deniers List' currently include Gamz the Dwarf (Location 4), Sir George (Location 15), and Father Farhred (Location 17), though more are soon to follow (likely the party members)!

11. Seeing an opportunity for greater control, Town Council Member Benedictia Trenchaus (Location 9) is now being supported as Mayor by the Cult of the Shield Ghul, in return for banning most daily activities in the name of Public Health. The Watch isn't too keen on being around citizens though, so enforcement isn't that consistent despite her many domineering decrees. This is good because she often ignores her own edicts as she scoffs at the commoners, going out to dine and get her hair done while they are forbidden from doing so.

12. Adventurers who remain in Walstock to put an end to this current threat (and not run away screaming) will uncover that Dr. Fausti has in fact entered into an infernal pact that has led to this very plague! It is with Beliah (see Volume II), of course, though any arch-devil would do (per Referee).