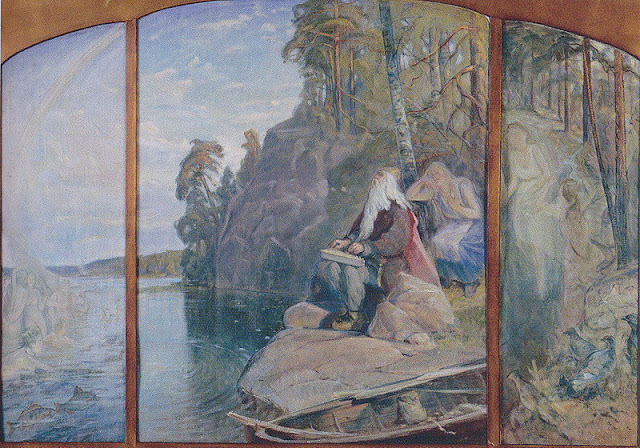 Vainamoinen Encounters
Some things one quests for are already right behind them.

2. Smiling, well-appointed, and well-proportioned, a selection of potential wives dwell here. There are 1d3 with Charisma scores of 14 + 1d4 to boot: blondes, brunettes, and redheads. Each is also faithful to either Mielikki (friendly, rustic), Ilmatar (graceful, quiet), or Loviatar (mysterious, harsh), and a faithful of Vainamoinen is pleased indeed and will be here too, sharply-dressed (see #12 below)!

4. Sounds of crafting can be heard up ahead. Investigation shows it's an old man crafting a (roll 1d4):
[1] canoe, [2-3] kantele, [4] metal rake. Despite his concentration, the old man has a 10% base chance of injuring himself each round if the party doesn't assist him and a 100% chance of being a follower of Vainamoinen.

5. Do you feel it too? The wise will know that a haltja dwells here. Refer to the spirit encounters series [link] to see what kind. Those who end up pleasing it may attempt to learn a synty related to the place- see Magical Side-Effect #9.

6. An old woman offers a random party member a flagon of ale. If foolish enough to drink, he will find it to be full of frogs, snakes, lizards, and worse- a gift from Tuonela, the Finnish Underworld! He must then save vs. death or be trapped in a net of metal, handiwork of Tuonetar's three-fingered son, unless he can be polymorphed into a snake or otherwise assisted by a follower of Vainamoinen.

7. A chance for inspiration befalls a random party member (and their player). If he or she can compose an original poem (in trochaic tetrameter of course) of at least 2 x 4d2 lines within the next 2d4 rounds, then he or she may cast a random Vainamoinen spell once, up to 24 hours later.

8. With laughing buttons and transmuting foliage (or the like), the next spell cast takes on a distinctly Finnish air of animistic magic. Those who witness it may then know where the nearest tietaja is so they may receive training in such enchantment if they so wish.

9. A random woman the party knows becomes pregnant after eating a berry. A child is quickly born 1d4 days later with full intelligence and will chastise any who do not convert to monotheism. Those who fail to submit must save vs. spell or take 1d2 Charisma damage from the shame, especially if they have claimed that the child in very unnatural.

10. 2d4 Norsemen explore this area, seeking the fabled 'runes' of Vainamoinen. If they learn that such are simply poems without symbols, then they will likely simply begin pillaging instead (a base 75% chance).


Next week: we take a short break from our examination of the Finnish divinities to look at some additional encounters and ideas for the revised release of Wyrd Ways of Walstock!