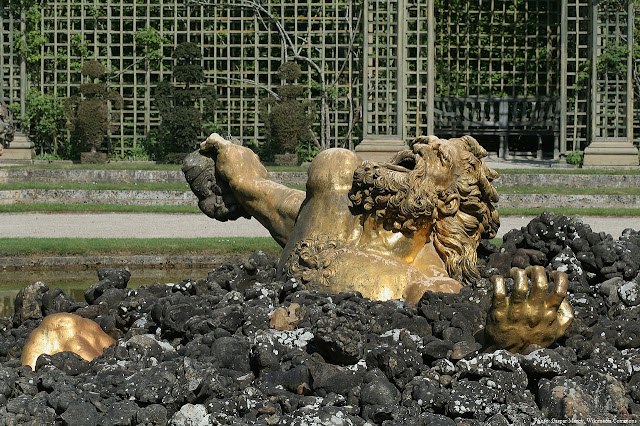 Foes of the Gods, gigantes (Greek giants) emerge from the earth to wreak havoc. Though spawned by Gaia and Uranus's fallen blood, they often show little other disposition except destruction, whether they serve the will of the Titans or even Typhon or not. What is certain is that they are forces to be reckoned with.

Enemy Divinity/Cult
Unlike other monsters which may serve a particular deity, gigantes are notorious for fighting deities, or at least the followers of the Greek gods. As a result, they will attack those of a particular allegiance first, though if there is no match, a gigante will happily try to destroy any it encounters who can't escape anyway. Still, followers of the divinity it considers enemy gain a +2 to all rolls made against that gigante, to return the favor. Roll 1d14.

Size & Appearance
Gigantes are understandably giant, each being roughly 8 + 1d30' tall and having a HD of 8 + 1 HD per 2' over 8'. They have a base speed of 50' and can typically do 1d6 + their HD damage per hit per round unless better weapons are available. 90% of gigantes encountered will be male; Referees may wish to adjust the motivations and stats of female gigantes (gigantis). Otherwise, all gigantes come in three general varieties (select or roll d3):
1. Giant in hoplite armor (gaining a +9 AC bonus, but also -10' speed)
2. Unkempt, wild giant (no modifiers)
3. Unkempt, wild giant with snake legs: those who first encounter it must save vs. death or suffer a -2 to all rolls due to fear; the legs also confer a -10' speed penalty, but also a +4 bonus to resist being grappled or knocked over

Lineage
Various tribes of gigante exist, granting special powers derived from their leaders and founders. Select or roll d14.
1. Alcyonean: cannot be slain while in its home domain (on the ground or above), instantly regenerating 25% of its total hit points instead of dying there. Also has a 25% chance of being winged, allowing it to fly at double its land speed.2. Alodaean: is double in size and HD, but also takes double damage from any magic of the Gods or their followers.3. Antaean: cannot be slain while touching the earth, instantly regenerating 25% of its total hit points instead of dying on the ground.
4. Damysean: is quite swift, having +20' speed, but also -2 HD.
5. Enceladean: its footsteps cause tremors, causing all within 120' to save vs. paralysis or fall over.
6. Ephialtean: it regenerates 1d6 hit points per round unless struck at least twice in the same round.
7. Eurymedonean: gains +1 HD for 1d6 turns for every follower of the Gods it slays.
8. Geryonean: has 1d2+1 extra, connected bodies or just heads (equal chance of either), either doubling or tripling its HD and allowing two or three actions per round in the first case, or just allowing extra actions in the second. Having multiple bodies does make it difficult for the gigante to fit into confined areas. Having multiple heads makes it difficult for the gigante to make decisions.9. Leonean: is leonine, allowing the gigante to make two claw attacks for 1d4+ 1/2 HD each and one bite attack for 1d6 + HD per round, as well as granting it +10' speed, but it also cannot use its claws to hold things.
10. Panoptean: like Argus, is covered in 100 eyes, never being surprised when awake, but also causing it to have an AC penalty of 4 and automatically failing any saves to resist seeing something.
11. Periboean: is semi-aquatic, allowing the gigante to breathe water and swim at its normal land speed. It also must be immersed in water each day or perish.
12. Polybotean: can only be permanently slain by damage from (unfertile) rock. Can also swim at normal land speed.
13. Porphyrionean: +4 to all rolls when triggered by lust, but also a -8 penalty to AC and saves when so aroused.
14. Procrustean: can ignore the use of one special ability or spell used on it each round, but must also take time to stretch or cut away any victims it catches, so that they fit on its arbitrarily heinous egalitarian bed.
Special Qualities
Gigantes can have more special powers and weaknesses in addition to their lineage. Roll for each to see what a particular one has.
- Ally of the Gods (5% chance): strangely, the gigante knowingly assists the Gods and thus would be understandably less prone to slaughter their worshippers.
- Better Weapon (25% chance): has more than just its fists to fight with, doing 2d6 + HD damage instead.
- Boulder Tosser (75% chance): has boulders that it can hurl for 4d12 damage each.
- Grab & Hurl (25% chance): if it grabs a foe who is 10' or more shorter, the foe must save vs. paralysis or be tossed 2d6 x 10' for at least 6d6 damage; gigantes with this ability may hurl such foes up to once every 1d4 rounds.
- Fear of Clerics (50% chance): due to bad memories (the giants did lose the gigantomachy), it suffers a -3 to all rolls made against clerics and their subtypes.
- Herculean Slain (50% chance): it cannot be killed by magic alone- a mundane wound (typically an arrow), preferably shot by a hero, is also needed to do the gigante in.
- Unusual Ancestry (10% chance): roll twice for its lineage, combining their modifiers.

Summoning Gigantes
Unless the summoner somehow serves a Titan (detailed in a future post) or Typhon (consider him a combination of Balor from Volume II and Apep from Volume III until he can be described at a later date), a gigante cannot be summoned! 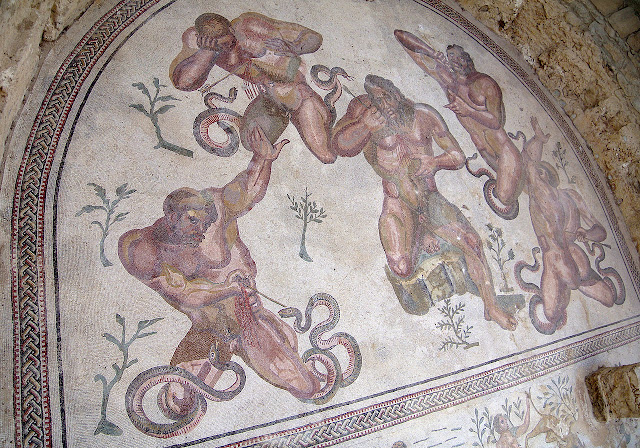 Next week: we shift to a series on Demon Lords, starting with Ghul-Ghul!
Posted by Dan Osarchuk at 7:19 PM