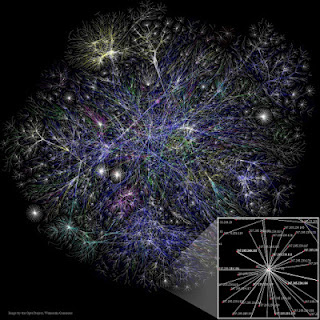 Magical Side-Effects
The divinatory power that Ghul-Ghul draws from the Interwebs is impressive, but not as much as the price demanded for its use. All one needs is some dangerous curiosity (and a Ghul-Ghul box, the demon lord's unholy symbol). Roll 1d12.

1. Error in Divination: Part of the diviner's personal information is unfortunately given to the target of his divination (if known) or to a random foe (if not). Roll 1d6 to see what is revealed: [1] true name, [2] lair location,
[3] known allies, [4] treasure location,
[5] other pertinent information, or [6] reroll twice. Such is the price of forbidden knowledge.
2. Ghul-Ghul Down! The connection to Ghul-Ghul's Interweb Pits is temporarily sundered, causing the spell to fail. The diviner is even unable to use any spells for the next 1d20 rounds due to a resulting failure with his Ghul-Ghul box.
3. Do-No-Evil Truth: Either what the diviner would like to know cannot be shown, or a distorted divination occurs instead (equal chance of either). The true reason is not because it can't be known, but instead because Ghul-Ghul does not wish it to be known!

4. The Cost of Fell Knowledge: And just what sacrifice will slake this Interweb Giant's thirst? The diviner immediately loses 1d6 x 10 gold pieces unless his spell scries on another, in which case they will pay it instead. If neither has that amount, then they experience the draining of 1d2 Constitution instead, part of their life force snatched away.
5. Ghul-Ghul Knows Best: Based on the caster's 'divining history', the demon lord proclaims that it has already prognosticated what the caster wants to know, so it casts a random one of his Ghul-Ghul spells for him instead!
6-8. Commerce Signs: The spell unfolds with strange runic messages appearing, made by those who have given Ghul-Ghul tribute. Any who notice them must save vs. death or become irritated, taking a -2 to all Wisdom based rolls for the next 1d6 turns, but true cultists of Ghul-Ghul are immune.
9. Thrill of the Interweb Sage: Accessing the fell trove of lore is addictive, and the diviner must immediately cast another Ghul-Ghul spell next round. There's a 50% chance of it not being expended when he does so, thus encouraging more addiction.
10. No Other Will Do: Though the spell can be cast with a 50% bonus to its range, duration, or effect, it causes the equivalent penalty to the next three non-Ghul-Ghul spells the diviner casts or that are cast within his presence, for Ghul-Ghul knows that they are scum.
11. We Hold the Lore Now: The Interwebs may grant vast divinatory power, yet it comes at the expense of those who already hold such erudition. The spell's effect, range, or duration is doubled, but the diviner permanently loses access to one non-Ghul-Ghul spell he knows; that is, unless he has a victim within 1 mile that he can attempt to have a known spell stolen from instead. In this latter case, the victim may make a save vs. death to resist such theft and to even prevent the diviner's boon.
12. Blessing of the Ghul-Ghulplex: With special access, the diviner taps into the raw power of the demon lord, allowing him to double the duration, range. or effect of his spell without any restriction. Not only that, but the spell use isn't expended for the day, proving beyond a shadow of a doubt that there's absolutely nothing evil about Ghul-Ghul at all.

DCC RPG Conversion notes:
Constitution= Stamina
Save vs. death= Make a Will save DC 10
Spell use not expended for the day= gains a +2 bonus to its spell check