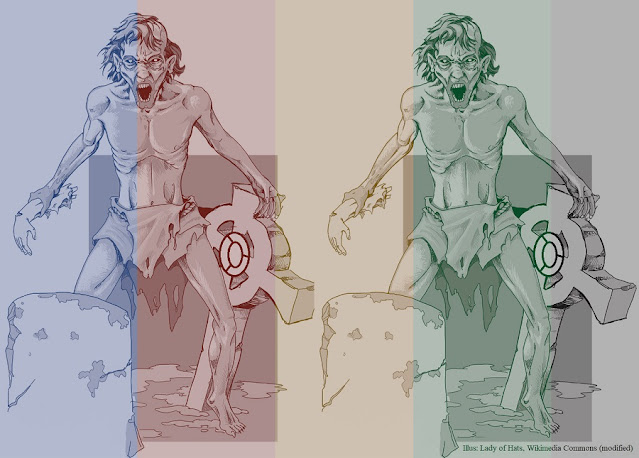 Demon Tests
1-3. Improving divinations...  Ghul-Ghul cycles its power yet again, requiring the diviner to await, doing nothing more than sit impatiently for the next 2d6 turns and drool.

4-9. We do 'Div-Div', how about you? The diviner must see, losing access to some of his spells (75% chance for each one, possibly including his turn ability) and speaking in a disyllabic way until he performs certain deeds. Roll 1d6 for each one lost to see what is required.
[1] Say 'Ghul-Ghul' until he attacks at least 1 who believes in the use of unbiased divinatory magic.
[2] Say 'Face-Tome' until he gets someone to be his friend, and then insults them greatly or ignores them forevermore.
[3] Say 'Bird-Chirp' until he hears the scuttlebutt from someone, and then gets them to lose their employ and/or treasure for what they said.
[4] Say 'Maid-Buy' until he gives someone an item they'd like, then makes it difficult or even impossible for them to get it again, possibly by harming another person or place where they could get it from.
[5] Say 'Thou-View' until he finds someone to sing a song or do another performance, and then have them fall into a trap or otherwise lose their platform.
[6] Say 'Web-Log' until he locates one who will express their true feelings, then gets them jailed or killed for it.

10-12. Ghul-Ghul has found the diviner to be 'evil' and therefore will suffer one of the results of #4-9 himself, whether via another diviner's doing, the Interwebs manipulation of Ghul-Ghul itself, or simply bad luck. In any case, the disyllabic chanting of the one seeking to punish the diviner will be held until the very end, so as to not clue him in to which impending malady he will suffer.
13-14. Even worse, the diviner's Ghul-Ghul box breaks, preventing him from casting any spells until a new one can be found- a process usually taking 4d6 hours! Perhaps it is unwise to rely so much on a demon lord.
15-17. The Interwebs calls and the diviner is whisked away. He returns in 1d6 days time, with both a 1d6 x 10% experience bonus and 5d20 points of damage due to the vast infusion of massive information, dazzling sights, and immense sounds; that is, if he still lives.

18+ Taking matters into its own, vaticinating hands, Ghul-Ghul manifests as an avatar, an Interwebs giant, to destroy the diviner and anyone else foolish enough to get in its way. See Part V for stats. Whether it deletes the diviner or not, it will remain for 2d6 rounds per demon test result over 17, unless itself is somehow deleted before then.