Clerics of Potnia, Part I 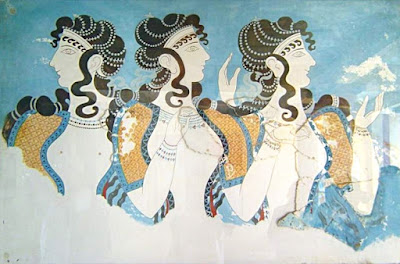 Priestesses of Potnia
Special: Being usually peaceful and matriarchal, there are no Minoan clerics per se, but only Minoan priestesses, most of which follow Potnia. See Divinities & Cults: Volume II for additional details on Minoan Religion.
Allowed Weapons: None, though they may appear armed, bearing labryses, snakes, or simply their breasts.
Allowed Armor: None (see Weapons, above)
Holy Symbols: Labrys, Bull, Snake
Can Turn: Any who wear shirts (or at least shirts that don't reveal one's chest!)
Minoan Mysteries: Priestess of Potnia always gain a +1 bonus to their casting rolls whenever their bare breasts are bared.