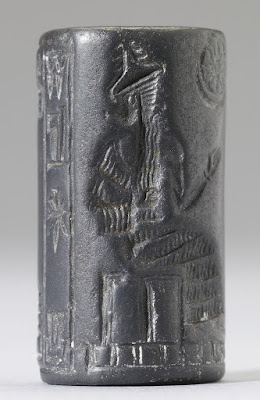 We continue our series on ways to incorporate the followers of various gods and goddesses from the upcoming Divinities and Cults: Volume III into your campaign.  Here is Enlil, Mesopotamian god of air, storms, & rulership.

2.  A group of men are chopping down trees, led by a cleric of Enlil. He will either (roll 1d4): [1] insist the party helps with the chopping, [2] ask for assistance driving off some wild men who are interfering, [3] provide a concubine for his god (via him), [4] all of the above. What is more, if the party isn’t helpful, then he will direct his men to have one of the trees fall on them instead for 4d6 damage.

3. An argument can be heard up ahead. It is an attractive slave talking back to her master, who then whips her. The party may decide to intervene, but slavery is legal in the land where they are and the slave is pretty mouthy.

4. The wind kicks up suddenly, turning into a storm. It lasts for 3d6 turns, causing a -5 to all rolls to those caught in it, blowing away any light or unsecured objects, as well as having a base 30% chance of knocking over any less-than-solid structures nearby.

5. The party spots a man who is staring at a flying creature. Further investigation will show that the fellow’s name is Hawk and he’s trying to use his magic string to help tame a winged wolf that’s hovering in the air.

6. The sky immediately grows very clear and imperious. Those who don’t follow any specific gods or goddesses (or whose players haven’t purchased one or more of the Divinities and Cults books yet) must save vs. death or undergo one of Enlil’s divine tests. Those who do (or have made such wise purchases) are spared.

7. A small mountain appears in the distance. It actually turns out to be a ziggurat! Does the party investigate further?

8. An unlucky party member feels that he is all out of love and so lost for the next 1d6 hours. Devout followers of Enlil will wish to cut off the sad sap’s air supply.

9. The loudest member of the party is suddenly knocked back, either by a Jarring Hand or Wind Missile spell. The attacker is a priest of Enlil who only wanted the noise to stop.

10. The most attractive female party member (or woman the party has met if they have no female members) is picked to be Enlil’s newest concubine. One of his avatars will jump out and surprise the lucky gal with the great news within 2d6 rounds.

11. The party stumbles across an Enlil prayer group. If not faithful followers of Enlil themselves, then the party will be chastised!

12. Tidings of war can be seen: Mesopotamian warriors and chariots on the march to conquer a rival city-state. Those who don’t follow Enlil should tremble in fear! Those who do should get ready for battle!