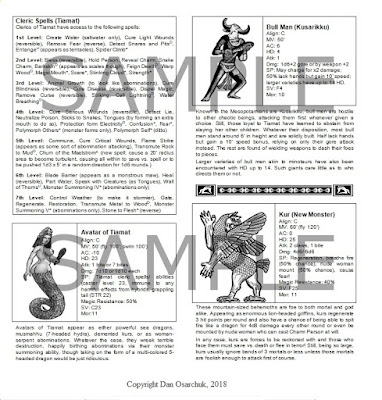 Not only does it have lots of information on Mesopotamian and Egyptian divinities, but Divinities and Cults: Volume III has tables and monsters galore.

Check out the sample above for two of the monsters included plus the spell list and avatar stats for Tiamat, the mother of many monsters.

Not only that, but there are also lots of optional rules and sidebars included in the book- everything from fighter types to different magical approaches to the layout of various temples!

Stay tuned to divinitiesandcults.com for further updates. Volume III for Labyrinth Lord should be ready in PDF sometime in the next few weeks.

Next week: we begin a series of random encounter tables by divinity, starting with the gods and goddesses in Volume III. It should further whet your appetite.