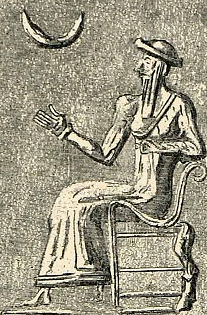 Our 6th installment on gods and goddesses from Divinities and Cults: Volume III, we have Nanna, Mesopotamian god of the moon & wisdom. Fittingly enough, his encounters are organized by the Mesopotamian Zodiac.

And additional wisdom is coming very soon. The Labyrinth Lord version of Volume III will be ready for sale in the next few days! Stay tuned for the announcement here first on www.divinitiesandcults.com.

Nanna Encounters
1d12
1. Gugalanna, the heavenly bull sends a bull lammasu in the service of Nanna to question the party. Those respectful of wisdom and law will be given aide. Those who aren’t will be trampled with righteous severity for 2d8 damage.  (Taurus)

2.  Mastabba, the zodiac twins have sent two thieves to mirthfully watch a priest of Nanna who has been blessed with a beard of lapis lazuli. The party notices this: do they intervene to stop the theft or do they help the thieves for a cut of the beard?  (Gemini)

3.  Allul, the celestial crayfish fills the immediate area with silvered waters, mimicking moonlight. Those within will either take a +1d3 bonus or -1d3 penalty each round for the next 1d6 rounds, due to the dancing light and shadows. (Cancer)

4. Urgula, the great lion summons forth a member of royalty who is single and ready to mingle. He or she is soon abducted by 2d4 dark lion folk (Ugallu) though and will require rescuing if the party is so inclined. In any case, they should wisely consider their options.   (Leo)

5.  Absin, virgin daughter of Nanna provides knowledge to the wisest party member in the form of a dream.  As long as he or she then tells only the truth the next day, they will receive a/an (roll 1d4):
[1] one-word answer to any question they pose, [2] +1 bonus to hit, [3] AC improvement of 1, or [4] +1 bonus to all spell rolls; that is, if being so honest doesn’t get them slain first.  (Virgo)

6. Zibanna, the heavenly scales tip and the world changes for the party. This could be something as simple as a word assuming a different meaning or as major as the ground turning to green (lunar) cheese. Little do they know, they’ve slipped into a Lunar Realm, suffering a -1 to all rolls (at least), due to the disharmony. Though they will return to their home realm within 24 hours, trying to explain what has happened to others will only get them labelled ‘lunatics’.  (Libra)

7.  Girtab, the zodiac scorpion reveals a dark, but enticing opening. Within might be great treasures, but also poisonous perils, not to mention scorpion folk (Girtablilu), and even a potent scorpion woman-witch who likes to play games with the hearts of men- a base 50% chance of encountering each! It’s probably wise to avoid the place altogether...  (Scorpio)

8. Pabilsag, the great overseer illuminates an outrage: someone has slain unarmed priests in a nearby Mesopotamian temple! Yes, it may have been priests of the sun god Utu, but even the faithful of Nanna should investigate. Doing so reveals the murderers to be [1] followers of Tiamat! [2] followers of Nergal! [3] a treacherous anzu! [4] rampaging Greeks whose leader can only be slain by stabbing his heel!  (Sagittarius)

9. Suhurmash, the celestial goat brings forth a stubborn conundrum and thereby begs the question of just when did goats (and earth signs for that matter) have anything to do with fish? Perhaps the party has passed into a Lunar Realm where Sahurmash is some sort of goat-fish? In any case, they will be befuddled, taking a -1 to all intellectual and spiritual rolls (including spellcasting) until they confer with a follower of Nanna in order to set things straight.  (Capricorn)

10. Gula, the wave lord floods a random, lucky party member with +2 Wisdom for the next 3 turns, but also with the Nanna-like test of having to take 1d6 extra rounds to explain anything. Let’s hope they put it to good use and also that others will have the patience to listen. (Aquarius)

11. Simmah, the heavenly swallower one allows a great intonation of tone to issue forth. Investigation reveals that it is caused by (roll 1d4): [1] 1d4 clerics of Nanna praying, [2] 1d3 monks of Nanna chanting, [3] 1d2 mystics of Nanna wondering where the sound is coming from too, [4] an anzu’s mating call (roll for initiative)!  (Pisces)

12. Luhugga, the field worker ram reveals in all his fiery glory that, after all this time, someone the party knows actually is an Avatar of Nanna. Even if the individual appeared to be a fool, it was only them testing the wisdom of others! In any case, the Avatar turns out to be [1] a random NPC in the party (including former ones if they’re all presumed dead), [2] the last person a random party member spoke to, [3] the last creature the party encountered, [4] a random one of the party members!  (Aries)