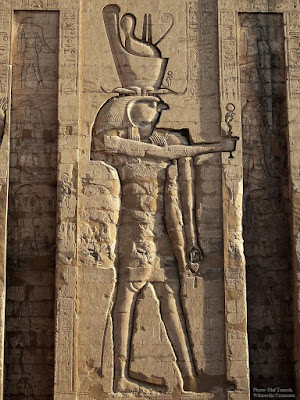 10th in the gods and goddesses series for Divinities and Cults: Volume III, we have Horus, Egyptian god of unity, the sky, vengeance, and nobility.

2. During their next battle, the party is assisted or even saved by a mysterious stranger. He turns out to be a (roll 1d6): [1-2] cleric of Horus, [3] monk* of Horus, [4] paladin* of Horus, [5] a noble fighter who follows Horus, or [6] a Horus Avatar.
* As more martial cleric variants, monks and paladins are described in Volume III.

3. 1d4 nobles pass by, accompanied by 1d3 Egyptian warrior bodyguards apiece. Their presence (and likely behavior) triggers a certain emotional desire in the party members (roll 1d6): [1] unity, [2] respect, [3] mild vengeance, [4] moderate vengeance, [5] major vengeance, [6] extreme vengeance! Whether such feelings are focused towards said nobles or on behalf of said nobles is for the Referee to decide.

4. Four canopic jars are discovered. One has the head of a human; the others, a jackal, a baboon, and a hawk. The wise will discern that these represent none other than the Sons of Horus! Possession of them will prevent injury or harm coming to one’s liver, lungs, stomach, or intestines respectively, allowing for much drinking, inhalation, consumption, and so forth, amongst other things...

5. The party comes across an Egyptian war-party. It contains the following roster and is likely not here for fun (a base 85% chance): 3d4 Egyptian warriors, 2d4 archers, 1d4-1 chariots, and a heroic follower of Horus as leader (see #2 above for his class, though he won’t be mysterious).

6. Someone needs to be punished! The violator is a (roll 1d6): [1] whore (never to be confused with Horus!), [2] defiler, [3] upstart, [4] liar, [5] thief, [6] follower of Set. If unable to give them their just deserts by sunset (especially followers of Set, since they belong in the desert!), then each member of the party must save vs. paralysis or resort to drink.

8. A strangely curved, yet magic sword comes into a lucky party member’s possession (a Khopesh). It can be used as either a scimitar or a hand axe each round and has a dweomer of (roll 1d6); [1-4] +1, [5-6} +2. But unless the character is specially trained in its use, he or she has a base 50% chance of accidentally injuring him or herself with it or even damaging the weapon on a critical miss.

9. The party spots an enormous firebird up ahead. Though it might seem fearsome (and its eggs priceless), the noble phoenix (a.k.a. bennu) will only breathe its incredibly hot fire on those upstarts who disturb its peace.

10. A great betrayal occurs. An unlucky party member either turns on others or is him or herself betrayed by some other (equal chance of either). In any case, Horus would never favor such heresy!

11. A child is born. Though he will invariably have a sidelock of hair, he will also have an increasing number of the following traits (roll 1d6): [1] a hawk head, [2] mother is a priestess of Isis, [3] father is a priest of Osiris, [4] is of noble birth, [5] has a bone to pick with Set and his followers, [6] is actually an Avatar of Horus (the Younger).

12. A dastardly follower of Set challenges the party, singling out any followers of Horus, Isis, or Osiris first. He wishes to engage in an unpleasant competition that involves (roll 1d6): [1] semen, [2] boats,
[3] lettuce, [4] the desert, [5] Upper or Lower Egypt, [6] reroll twice.

Next week: priestesses of Isis!