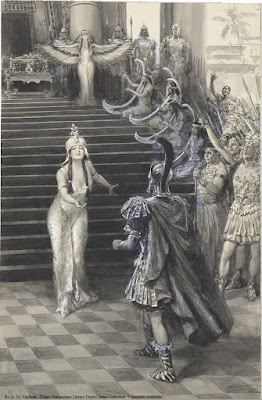 11th in the gods and goddesses series for Divinities and Cults: Volume III, we have Isis, Egyptian goddess of kindness, motherhood, & magic.

Isis Encounters
1d12
1. Rain falls from the heavens, bringing nourishment and healing 1d6 hit points from Queen Isis above. What is more, it only has a 20% chance of causing a deadly flood.

2. A random female member of the party (or NPC if the party has none) becomes pregnant. Roll 1d6: [1] The child was conceived from a slain father, [2] the mother gains the abilities of a 1st level priestess of Isis until the child is born, [3] the child is bird-headed, [4] the child is an actual Avatar of Horus, [5] reroll 1d4 twice, [6] all of the above.

3. Two great lovers meet and become inseparable. They are certain to create children within a few years’ time, but are also certain to create much intrigue (that will greatly affect the land) much sooner. What is more, there’s a 75% chance that 1d4 followers of Set will work to destroy them.

4. Deranged brigands are, of all things, using the goddess of kindness’s name to wage a campaign of terror! The local temple of (the real) Isis will happily reward any who put a stop to such brigands and are fine if those who do so aren’t kind about it!

5. A strangely shaped ankh is uncovered. Those who are knowledgeable will determine that it is in fact a tyet and it grants the use of a random Isis spell of 1st, 2nd, or 3rd level up to once per day to any who wear it. On the other hand, the lascivious will only stare at it if exposed (save vs. petrification negates), associating it with something (or things) else.

6. A lucky spellcasting party member is blessed by Isis with a +1 caster level for the next 24 hours. He or she must roll on the Alternate Magical Side-Effects table during that time whenever casting a spell though. See Volume III.

7. Seven scorpions join the party during their next rest. They offer their protection (whether the party wants it or not) by happily sparing all who are kind, motherly, and/or magical. They will also happily sting all others.

8. Isis is known throughout many lands, allowing the powers of those who follow her to be quite versatile. As a result, any clerics in the area can immediately decide to permanently swap up to three magical side-effects, divine tests, or spells of hers with those of their own god or goddess, thereby customizing their clerical abilities further. On the other hand, those who already follow Isis can do the same with another divinity they’re familiar with.

9.  A potent and motherly woman arrives. She is (roll 1d8): [1-4] a priestess of Isis, [5-6] a mystic of Isis,
[7] simply a faithful follower of Isis, [8] an Avatar of Isis. In any case, and due to the light in her eyes, she’s also likely somebody’s darling (or mother- a base 75% chance of each), though she always walks in Egyptian fashion, striking poses upon chariots.

10. A random husband that the party knows is chopped up (to death), thrown in a coffin, and tossed in a river. There’s a base 75% chance of it being done by a follower of Set, but only a base 25% chance of his wife falling to pieces afterwards.

Next week: priests of Osiris!