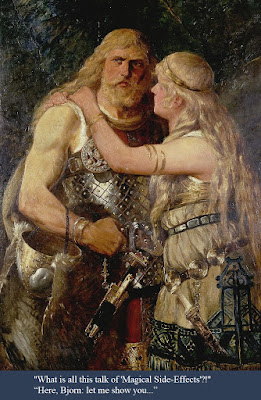 Along with a number of other updates and fixes being made to Volume I (both the Labyrinth Lord and DCC RPG versions), divinity magic is being adjusted so as to now affect all cleric spells. This change not only allows the magic of followers of say, Apollo and Thor to be somewhat different when they heal, but also when they cast divinatory, transportive, or other spells too. What is more, some magical side-effects may or may not apply depending on whether the spell is intended to help or harm the target.

As in Volume III, there’s a pattern to magical side-effects, though for the Volume I revision, they will follow a different arrangement, reflecting how Greek and Norse magic varies from Egyptian and Mesopotamian magic. Still, there will be a great deal of variety even amongst gods and goddesses of the same culture. In addition, some of these results won’t be the same if the divinity is dark or otherwise unusual.

d12
1. The magic will either require a certain purpose be fulfilled (if Greek) or cause hit point damage (if Norse). This result reflects the personal interest Greek divinities can take with mortals, as well as the somewhat harsh and grim nature of Norse myths. In any case, both can be remedied with an appropriate sacrifice.

2-5. Something unfortunate may befall the cleric or the spell’s target, depending on whether the spell would be beneficial or not. In some cases, the side-effect can be circumvented depending on the god or goddess being invoked and how merciful they are.

6-8. No side-effect.  Occurring less often than in Egyptian and Mesopotamian magic, this reflects how Greek and Norse magic has more variation thanks to the greater variety of locations where it’s practiced and it occurring later in history.

9. The spell gains a 50% bonus to one of its aspects, but also comes along with a requirement. Fate is very important to both the Greeks and the Norse, though the Greek requirement will likely be more philosophical, while the Norse one will be more practical.

10. The spell gains a 50% bonus to one of its aspects if used along with an optional requirement. This typically involves behaving in a way smiled upon by the god or goddess. The Greeks and Norse often have a personal connection to their divinities which is reflected in this result.

11. One of the spell’s aspects is doubled if a requirement is met- usually the presence of an item or force sacred to the divinity.

12. One of the spell’s aspects is automatically doubled and can either be cast again that day (if using Labyrinth Lord rules) or gain a +2 bonus to its spell check (if using DCC RPG rules). In addition, it grants an extra bonus if the spell is meant to be beneficial to the target. Dark or harsh divinities will likely not allow this though.

That should give you a general idea of the main updates being made to Volume I. Remember that those who’ve already purchased their copies will of course get the updated versions for free on Drivethru RPG when they’re available, sometime near the end of May. They should also be available in print-on-demand too.

Stay tuned to www.divinitiesandcults.com for the latest updates.

Next week, we continue our series on cleric encounters with Anubis!