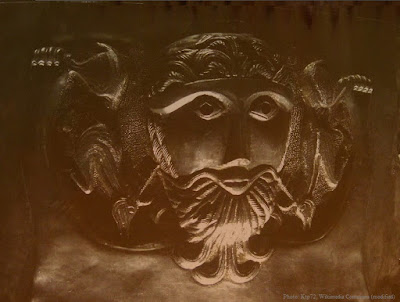 We return with another round of Divinities and Cults Volume II encounters. Behold the Dagda: Celctic Good God and All-father!

2. Two chariots are set side-by-side, bearing heavy loads of (roll 1d4): [1] stout men, [2] stout women, [3] stout oxen, [4] stout barrels of whiskey. A cleric of the Dagda officiates with an announcing voice while a crowd of 2d6 Celts wait to see which one can pull better.

3. The party comes upon a great feast. Besides the tankards of ale, hunks of meat, pots of stew, and loaves of bread, there are 3d6 festive and very red-necked Fianna (see Volume II for stats), along with a druid of the Dagda who will be happily partaking. Looking on are (roll 1d4): [1] 2d6 rival Celts who wish to partake too, [2] the druid’s wife (jealous and vengeful) over his partaking, [3] 1d3 mirthful fey, [4] 1d2 quiet nature spirits.

4. The next heavy drink that the party encounters becomes especially heavy, weighing twice as much and having twice the alcohol content. What happens then is anyone’s gin-guess.

5. The party is rescued by an especially rotund druid of the Dagda. Apart from his fondness for massive quantities of food and beer, he has seen a coven of witches somewhere in the nearby hills (roll for additional encounters there).

6. Fomorians! 1d3 of these monsters come scrambling out of the dark, caterwauling and wishing to engage in all that’s unholy. See Volume II for their stats or count them as mutant hill giants, though if the party is hopelessly outmatched, a cleric of the Dagda will arrive to help fight them off.

7.  A strange cauldron is uncovered. Apart from its many stylizations and bas-reliefs, it grants any food or drink requested and can even bring the dead back to life if placed inside. Such an item would seem a mighty boon; that is, until others find out about it and would seek to claim it in whatever way they can.

8. The sweet sound of harp music can be aheard from afar. Those who would call to it though risk mortally wounding all who it must pass through in order to come hither (save vs. death or take 1d20 damage). And even though it’s not as potent as Uaithne, it’s actually quite nice once all the blood is wiped off.

10. Two rival groups of Celts are a-fighting and a-fussing over who stole the others’ herd of sheep. Actually, it was an Avatar of the Dagda who has done so (for his breakfast). Indications of this include giant footprints, huge club drag marks, lots of wool, and a residual divine presence. It may be up to the party to let them know or else the feud will only grow worse.

11. For the next 2d6 hours, a small group of Celtic farmers can be heard discussing which chariots are best used for cutting crops and grass with their scythes. Those who don’t escape the far range of their voices and aren’t of an agricultural bent must save vs. spell or go insane. Only a devout follower of the Dagda can cure the resulting malady of hearing such things as ‘John’ and ‘Deer’ over and over in one’s head.

12. Seemingly out of nowhere, an immense club smashes through the area, causing damage based on who those present are:
Fomorians and other foul inhuman types: 10d6 damage
Spirits and nature types: 2d6 damage
Followers of the Dagda: 2d6 damage
Innocents: no damage
All others:  4d6 damage

Afterwards, great laughter can be heard. Even better, a large amount of food and drink will be made available to any who survive.