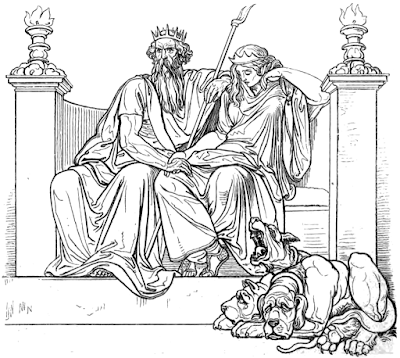 Next in divinity encounters, we see the will of Dis Pater take hold: Roman Lawful God of Death, the Underworld, & Riches.

Roll 1d12
1. Despair. All in the party must save vs. death or lose hope, thanks to life’s apparent meaninglessness. Those who fail take a -3 penalty to all rolls until either 1d6 hours pass or they can speak with a cleric of Dis Pater about the inevitability of death, making them enjoy what’s left of their life that much more.

2. Despise! A random individual within 60’ becomes outraged at another random individual in the same area. They must save vs. spell and attack, gaining a +4 bonus to hit if one who is faithful to Dis Pater is in range too.

3. This Father: Gloom fills the area, bringing an exhaustive serenity. All children (of any age) must save vs. death or fall into a deep sleep, slumbering in grave peace for 4d4 hours. And those who fail badly might just sleep forever (per Referee).

4. Not an Arch-devil, fool! Though dour, great Dis Pater isn’t fiendish and his followers approach the party to prove that point. They are asked to defeat a (roll 1d3): [1] group of diabolists, [2] group of demonists, or [3] group of necromancers that has unrightfully claimed Dis Pater’s name. Of course, if the party refuses, then the followers of Dis Pater will become even dourer yet.

6. A great hoard of Plutonian wealth is discovered, worth at least 4d4 x1000 gold pieces. Of course, it is guarded by a cerberus hound, preventing all but the most resolute from stealing such riches. See Volume II for the hound’s stats.

7. Emerging when least expected, a cleric of Dis Pater confronts the party. Any who have been resurrected, trafficked with the undead, or failed to make proper funeral arrangements are sure to meet his wrath.

8. One festival every hundred years? A group of 4d4 Romans have gathered to honor the God of Death. They have selected for him a sacrificial bride who is (roll 1d4): [1] a virgin, [2] a conquered noblewoman, [3] a princess from a far-off land, [4] one of the party members. Whoever it is, the celebration will be notable and involve many well-rehearsed rituals since they’ve had so much time to prepare, allowing those who use that boon to gain an additional +1 bonus in a very Roman way.

9. 1d6 dread shades emerge from the dismal darkness, attacking the party. One of the latter is actually caring a defixio, whether knowingly or not, and that is what’s drawing them. See Volume II for the details of such things.

10. Missing Proserpina greatly, Lord Dis Pater causes the demise of a similar priestess in order to bring more light into his dim realm. Such a death will then trigger the priestess’s cult to seek revenge upon his. Roll 1d4: [1] Persephone of the Greeks, [2] Aerecura of the Gauls, [3] Ereshkigal of the Mesopotamians, [4] Hel of the Norse. Soon there will likely be more souls going to his dim realm.

11. Menacing laughter erupts from all around. Anyone who doesn’t follow Dis Pater must save vs. death or flee in fear in a random direction for the next 2d3 minutes. Followers of Dis Pater may wish to follow along anyway in order to have some maniacal laughter of their own.

12. Behold, a portal to the Underworld! Who knows what one would find there- or what might emerge, except of course those who would refer to Volume II.