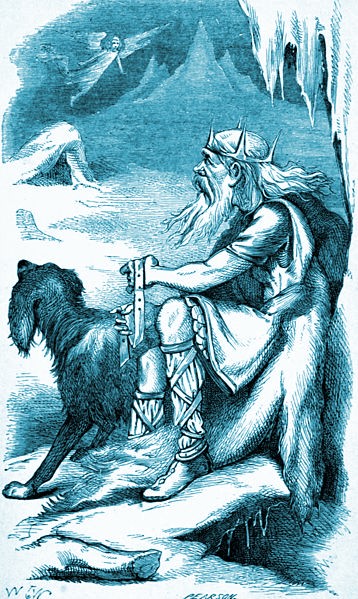 Tired of all this heat? See what Thrym has in store for bringing on the Fimbulwinter. Roll 1d12.

2. What an uproar is warmth! The most fiery or hottest object within 60’ immediately burns out, unable to be warmed again. If no such thing is particularly warm, then it is a random body that is snuffed out- a fitting sacrifice to Thrym.

3. A chill wind blows, giving followers of Thrym and all others who enjoy such cold a +1 bonus to their rolls for the next hour. Those who don’t will suffer a -1, with fire types even suffering a -3 during that time.

4. The party is approached by a frost giant (see #1 above) who strangely doesn’t want to kill them. In fact, he has information on another cult in the area that wishes to bring about the end of the world (in a non-Thrymian way) and would be only too happy if the party put an end to it. That rival cult follows (roll 1d4): [1-2] Surtr,
[3] an aspect of Thor who has gotten a bit too much into cross-dressing, [4] Apep. Only Thrym can say how the world will end.

5. Lurking here is a group of 2d4 blue-haired humans, ready to excoriate any others for lands apparently stolen from mountain folk. They follow Thrym in his aspect of the Glowing Spectral Personhood, though unbeknownst to them, he looks forward to the day when he can coldly eliminate such pawns too.

6. The area fills with an icy, blue liquid that smells funny. Those who investigate may wish they hadn’t, for it is a frost giant who has decided to relieve himself.

7. Beware! Word has it that a particularly antagonistic frost giant dwells in this area. A follower of Thrym, this thursir (see Volume I for details) will happily cause uproarious woe upon any unfortunates it captures, using its spells to create ice to both slip and injure.

8. With a sharp then dull pain, rimefrost covers all within a 1d6 x 10’ area. Those immune to cold find it quite pleasant; those who aren’t will find it quite unpleasant, being unable to move for the next 3d6 rounds, held fast and helpless for what those who are immune might do.

9. The next attractive woman the party meets turns out to be a transvestite warrior claiming he is actually a follower of Thor. Despite any misgivings they might have, he insists he’s doing it to kill frost giants, and there is a base 50% chance that it's actually true.

10. Howls can be heard around the corner, though they’re not just from the frosty wind. Investigation reveals that it is a group of 3 Thrym devotees, nude and rimefrost covered, tutors wishing to slay some rodent before it sees its shadow. How else will they ensure a snow day?

11. The air grows colder still. Time for a Cold Encounter- see Volume II- though there’s an additional 50% chance of a frost giant showing up as well (per result #1 above).

12. Brrrhh! The skies erupt with sleet and snow, soon becoming 1d6+4 feet deep.  It is a taste of Fimbulwinter and immediately triggers another Thrym-like encounter.

Next week: Spirit Encounters, Part I!