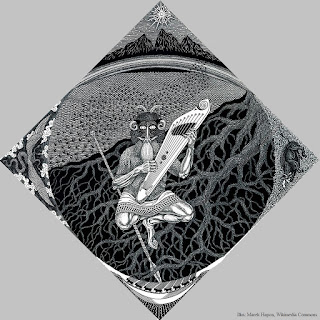 Underwordly chaos from the magic-man rings true. Those who would harness it must see what's required, two. Roll on the following tables (Flow and Form), combining them to determine the spell's magical side-effect, if you do.

FLOW (d8)
1. Give Unto Me: The spell requires the Form rolled in order to function. It will only do so once it is provided.

2. It Would Behoove You: If the Form isn't available, the spell works at just 50% its normal strength.

3-6. Nothing Yet: The spell works normally this time; no need to roll for Form.

7. A Wise Choice: If the Form is available, the spell's effect, range, or duration can be doubled. If not, then the spell has a 50/50 chance of either still being able to work normally or won't work this time at all!

8. Potent: The spell occurs for twice its usual effect, range, or duration, and it is not expended for the day. The cleric also gains the ability to sense the direction to the nearest Form rolled for the next 1d6 turns.


FORM (d6)
1. Under: The cleric is either actually in some subterranean place or otherwise very well-hidden from the eyes of Law.

2. Earth: A handful of dirt, soil, or stone is in the cleric's grasp.

3. Water: The cleric is within 30' of some body of water or at least have a pint's worth on him from an underground source.

4. Serpent: Something very serpentine is held by the cleric- living serpents can be within 60'. Other beasts, if hairy, will also do at that range.

5. Cunning: The spell is cast without anyone else noticing, with music, or in some other, especially clever or Chaotic way.

6.  Magic: All magical effects within 120' of the spell's casting works at 1d6 x its normal strength for the next 2d6 rounds (roll for each spell and magic item already present or that enters the area). Ignore the Flow result in this case- the magic flows on its own!


DCC RPG Conversion notes:
Spell not being expended for the day= spell gains a +2 bonus to its spell check

Veles Sorcerers
Treat as his clerics, except that they fight as and have the HD of magic-users (DCC wizards), but also have no limit to their daily spells- they can keep casting spells until they wish to stop (or are stopped).

What is more, they roll an additional d10 whenever casting their spells, along with the d8 and d6 on the tables above:
1. The spell triggers a divine test (detailed next week)!
2. The spell may require two Forms to work- roll twice on that table to see which ones.
3. The spell affects a random target within 120' instead.
4-8. The spell  has no additional sorcerous requirement.
9. The sorcerer automatically casts a random spell on a random target within 120', sometime within the next 1d20 rounds. possibly including himself.
10. The spell functions at 1d4+1 x it's normal power!