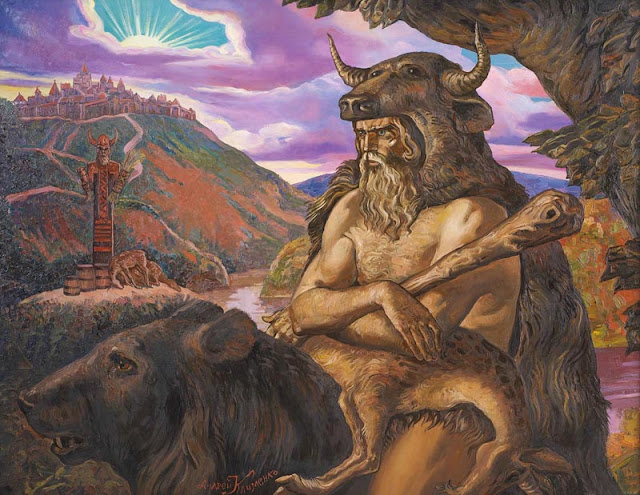 3. Undermine the underhanded. There are those who claim to bring things down, but would only then lead to more tyranny. The party is approached by a follower of Veles who seeks assistance with defeating such types (who themselves likely belong to a cult) (roll 1d3): [1] a 'Gang' that forces others to 'Get Along' (or else), [2] those protesting the use of 'bad words' (and thereby demand bizarre recompense from those who use them), [3] systematic inquisition attempts against the local, forthright but buffoonish king (so that they may create a dictatorship of their own).

4. A huckster is spotted, but a group of cultists are also nearby, as well (roll 1d4 to determine the latter's allegiance): [1] Uncle Steel Dwarf, [2] Tezschnaz, [3] Enak, [4] Chernobog. The former may be forgiven by Veles, but the latter may not, for they are what always brings about the end of Slavic (and other human) civilization.

5. You have stolen my name! A random, unlucky party member has his or her name taken; no others will be able to utter it, nor recognize the one afflicted easily until either 1d3 days pass or a volkhv of Veles provides blessing. Until then, all followers of Veles will have access to 1d6 x 10% of his wealth and other accesses!

6. This place demands a Secret Word to Pass in order to proceed any further. Who may guess it? Those who make an Intelligence check with a -10 penalty will, though followers of Veles and similar divinities won't suffer it in this case. What is more, those who fail face more than simply barrier though: they must save vs. spell or have their name stolen too (per result #5 above).

7. Terrifyingly, a howl erupts and a beast appears! It is a (roll 1d4): [1] wolf, [2] bear, [3] serpent, [4] horned beast. It will attack any it can reach for the next 3d6 rounds, invincible, targeting Lawful combatants before all others (and followers of Perun even before them), only to vanish once more. Followers of Veles would be wise to stay out of the way.

8. Rumors abound of Varangians setting fires, making practical jokes, and toppling pediments in the area. Yes, though they do follow Loki, Slavic followers of Veles will find such acts to be not in their interest and may even take action themselves (a base 50% chance).

9. Punctuated by high winds and a thunderclap, 1d6 followers of Perun arrive, seeking any followers of Veles to attack on sight. See  Perun Encounters (link) for additional details if needed.

10. Who will have Mokosh? 3d6 followers of Veles battle 3d6 followers of Perun to find out. Each side has equal chances of defeating the other; that is, if the party doesn't intervene to see whether her waters will rise up or down.

Next week: priestesses of Mokosh!