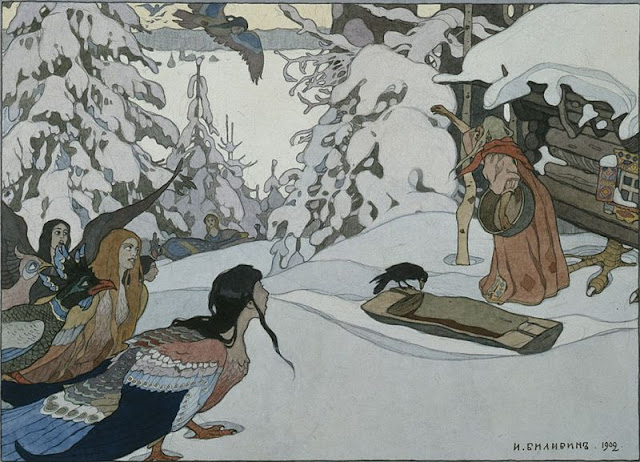 Baba Yaga Encounters
Terrible things may happen, but those who survive may come out the better.

1. Old age comes for us all. A randomly determined, unlucky adult within 120' begins to experience more of the drawbacks of decrepitude. Whether it be aches and pains, or just finding it harder to do things generally, he or she suffers a -1d2 reduction to a random ability score, but also gains a +1d2 bonus to Wisdom.

2. Can you stand the tests? We shall see if a random party member has gone through enough already. Roll a 1d20: if the result is less than or equal to the character's level, then they gain an additional level. If not, then they lose 1 instead. Investigation will show that it is Baba Yaga at work.

3. Three skulls are revealed. One burns for 3d6 damage, the other has an eternally lit flame, and the last grants immunity to fire for 24 hours. Those who pick them up will find out for themselves, though kolduns and witches will know already.
4. Up ahead, three cauldrons lie. Those who climb in will discover that each one may cause (roll 1d3): [1] old age (per result #1 above), [2] chicken legs (per divine tests #10-14), [3] +1 caster level. The effects last until the next (roll 1d3): [1] dawn, [2] dusk, or [3] midnight, though the bad memories may endure much longer.

5. Who is brave enough to enter the hut that stands upon chicken legs before you? How about the other two next to it? The first to enter one will be granted the answer to any one question they seek; the other two, death, putting one's chances of living at 1 in 3, while those faithful to Baba Yaga or a similar divinity will only be knocked unconscious with a wrong choice.

6. Baba Yaga creeps closer. 1d3 party members immediately experience one of her divine tests- roll 1d20 on that table. Those who survive gain 1 level of koldun, even if they don't want it.

7. Perhaps servants of Cherno-Baba Yaga, perhaps not, 1d6 alkonosts (Slavic harpies) lurk here, seeking prey. There is also a 50% chance of a follower of Baba Yaga arriving (per #11 below), whether to do battle with them, or to assist (an equal chance of either).

8. One of three ride by: a mighty, phantom bogatyr (Slavic knight) signalling a change of time (roll 1d3):
[1] white - dawn, [2] red - dusk, or [3] black - midnight. It then becomes that time, leaving those who don't follow Baba Yaga or similar divinities to pause in confusion for 1 turn, a common consequence of such a radical change in time.

9. With horrid nightmares ending, a random, unlucky party member awakes from his or her next sleep, but cannot move, for they have been hagged! And though they will eventually regain motion 1d12 dreadful minutes later, the horror of this nocnitsa visiting each night can only be stopped by performing some deed to one faithful of Baba Yaga (per #11 below), which might be even worse.

10.  A witch war is brewing between a group of 2d6 kolduns of Baba Yaga and 2d6 witch followers of another goddess (roll 1d6): [1] Hel of the Varangians, [2] Hecate of the Greeks, [3] Morrighan of the Celts, [4] Trivia of the Romans, [5] Ishtar of the Mesopotamians, [6] Loviatar of the Finns. Most might wish to flee such a calamity, though the heroic will wish to stand and fight.

12. Death comes for us all. A randomly determined, unlucky adult within 120' must save vs. death or die. If they save, then the next adult in a random direction must save instead. The process continues until one perishes, proving who is worthy and who is not.


DCC RPG Conversion Notes
Wisdom = Personality
Save vs. death = make a Will save DC 10


Next week: warlocks of Chernobog!
Posted by Dan Osarchuk at 4:21 PM