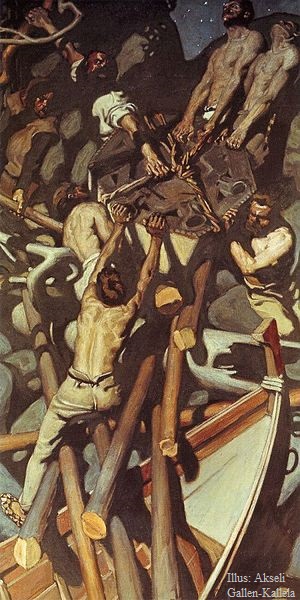 Even when the result isn't right, the faithful must forge again.

1-4. The item is off. The cleric must spend the next 4d6 turns repairing one that he has forged. Once finished though, it may even be 10% better/more effective if the cleric did so particularly well (an Intelligence check).

5-12. One's never sure what qualities are truly held. A number of the cleric's spell-holding items (50% chance for each one) end up being of a different alignment and/or disposition than what was previously thought. Each one will then either compel their bearers to behave in a way that matches or simply do so themselves (equal chance of either), causing such things as  Lawful or Neutral bearers to become quarrelsome, Chaotic bearers to behave faithfully, or the item itself to start trying to kill everyone since it is now Chaotic and Murderous. A save vs. spell negates if it is the bearer who's affected, though those who fail will behave in such a way for the next 1d6 hours. Items acting on their own will do the same unless stopped beforehand and receive no save.
Roll 1d8 to see what the compulsion is:
[1] Chaotic Murderous, [2] Chaotic Quarrelsome,
[3] Chaotic Ill-Tempered, [4] Chaotic Ill-Mannered,
[5] Lawful Well-Wrought, [6] Lawful Faithful,
[7] Lawful Utilitarian, [8] Lawful Many-Faceted.

13-16. Unlucky in love, the smith must forge ahead. Either the woman he is with (or the most beautiful item he has if he has no woman) becomes one of the following, leaving him forevermore and taking half his possessions with her (or it). Roll 1d4.
[1] A deal-breaker who is unwilling to relocate.
[2] A heartless bride of gold and silver.
[3] A screeching seagull.
[4] A giver of multiple, overly difficult quests.


17+ The Bride of Beauty awaits and the Ilmarinen cleric must perform some quest to try to win her over from the grasp of Louhi. He and any nearby who wish to go with him are gone for 1 day in order to (roll 1d4):
[1] plow a field of serpents, [2] bring the Bear of Mana from Tuonela (land of the dead), [3] catch a monstrous pike from the same, [4] engage in riddles with a child.

Unless the Referee decides to adjudicate the quest more specifically, it is shown that, upon their return (if they still live), each took 1d20 damage and has a 10% of recovering either an actual stunning (and single) woman of 15 +1d4 Charisma as their bride or an item of similar beauty. For every divine test result over 17, increase the time they are gone by 1 day, the damage by an additional 1d20 each, and the chances of recovering a Bride of Beauty by an additional 10% total.