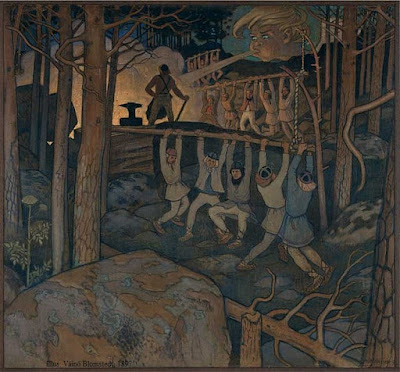 Magical Side-Effects
Skillful artist, Ilmarinen forges wonders of metal- that is his magic. As described in Mysteries of Ilmarinen, his clerics can smith items, and when casting a spell, they do the same. Each one must be worth at least 10 gold pieces per spell level held. Once forged, the item waits until anyone with the matching alignment or emotional state uses it, thereby allowing them to make the spell occur. Only then will it be expended.

Still, not all creations are Lawful, so the cleric may even destroy the item and reforge it before it falls into the wrong hands. In such cases, the cleric's spell use is lost for that day, but the precious metals it is comprised of are not. And to prevent an overabundance of such wonders, an Ilmarinen cleric may only have up his level x 3 items waiting to used as spells at one time.

Otherwise, roll 1d12 to see what nature each item has:

1. Chaotic Murderous: Bloodthirsty, the item seeks great harm. Only those intent on killing, maiming, or malicious wounding can wield it.

2. Chaotic Quarrelsome: The item enjoys making trouble between others. Just the ones who savor discord for its own sake can benefit from its use.

3. Chaotic Ill-Tempered: Rushing and wasteful, the item charges headlong into things. Only the ones who are heedless too may carry it.

4. Chaotic Ill-Mannered: The item solely works to destroy things; it is nihilistic. It may be held just by those with the same bent.

5-6. Neutral Cold-Breath of Sorrow: Any may grasp the item, but its forging is imperfect, likely due to the cleric having unskilled minders at his bellows. Once used, the item's spell has a 33% chance of actually being another, randomly determined Ilmarinen cleric one, likely to the grasper's chagrin.

7-8. Neutral Haltja-Gift: If the one who wishes to wield the item is in accord with the local spirits (if unsure, make a Wisdom check), then he or she may do so.

9. Lawful Well-Wrought: Strong and beautiful, the item is twice as valuable and harder to break. Fittingly, only those of a similar, orderly temper can use it.

10. Lawful Faithful: Reliable and steadfast, the item's spell may be used again if called upon- a 75% chance after each use. Naturally, it can just be carried by ones who would be as loyal (if not moreso).

11. Lawful Utilitarian: Functional and useful, the cleric can include up to 1d3 more of his spells into the item, cast into it in rapid succession. As a result, only ones who would appreciation such ability can use it and the many magics it contains.

12. Lawful Many-Faceted: Approaching Sampo quality, the item is forged as a great wonder: being well-wrought, faithful, and utilitarian (per #9, #10, & #11 above). As such, it may just be grasped by those who are as circumspect.