Clerics of Sobek, Part I 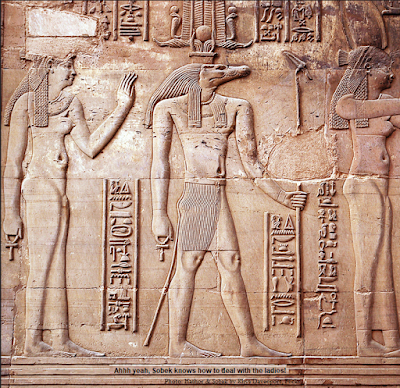 Clerics of Sobek
Special: Sobek is served by clerics and shamans*
Allowed Weapons: Spear, mace, short sword, dagger
Allowed Armor: Scale mail or lighter
Holy Symbol: Crocodile
Can Turn: Those unready for battle
Mysteries of Sobek: Clerics of Sobek wear crocodile masks, allowing them to make a bite attack that automatically causes 1d8 damage, +1 per level. They may do so up to once per day per level, though their masks always look very intimidating.
*Shamans of Sobek lose the ability to wear metal armor and to turn, gaining other abilities and replacing select spells instead (see Divinities and Cults: Volume II for details)

Magical Side-Effects
Sobek’s power is rife with toothy reptilian brutality- what else would one expect? Roll 1d12.

1. If I Could Just Get a Taste... The cleric will need to take a little nibble, preferably of someone, though something might do if no one else is around. In any case, he is compelled to make a bite attack within 1 round and it doesn’t count toward his daily total (per Mysteries of Sobek, above). The cleric’s got to eat!

2. Sacrifice: Rituals and offerings, equal to 1d3 rounds and 1d6 gold pieces per spell level are needed by Sobek for the magic to work. If nice, juicy morsels of freshly slain meat (or almost freshly slain meat) are given though, then no extra time or cost is required.

3. A Unique Craving: The cleric has gotten hungry again, but only a certain kind of something will satisfy. He must either lie with an attractive mate (CHA of at least 14+1d4) or chew upon some upstart who doesn’t properly respect crocodiles (or both) within the next hour. If he doesn’t, then the next spell he casts will only be at half its normal power.

4. Fear Sobek! All within 1d6 x 10’ of the spell’s casting (whether good or evil) must save vs. paralysis or flee in terror for the next 1d6 rounds, as the cleric makes his presence known with a mighty roar!

10. King of the River: The spell works normally and if cast while the cleric is at least partially submerged, it has a 50% bonus to its effect, range, or duration.

11-12. Wrath of Sobek! Sobek is mighty, but he is cunning too. The spell works automatically for double effect, range, or duration. In addition, if it is harmful and cast on one unsuspecting, then one of its aspects can be tripled!