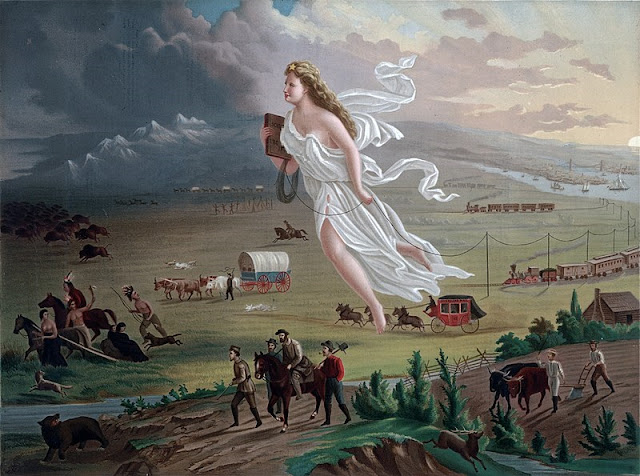 Columbia’s clerics determine what spells they can cast by which of her sacred places they visit each day. All the cleric need do is spend at least a minute at one or more there in order to be able to cast the associated spells for the next 24 hours. Otherwise, she may use her magic to heal hit point damage no matter what places she’s visited and her normal limits of spell use still apply.

For example, if a cleric of Columbia spent some time under the open sky, saw the dawn, and spotted some mountains, then she could use the spells from Spacious Skies, Early Light, and Purple Mountains for 24 hours. Later, if she was surrounded by allies and confectionary, then she could access the ones from Crowned with Brotherhood and Sweet Land too until another 24 hours passed.

Since Columbia is only a semi-divine spirit of place though, her clerics do have a 25% chance of failure each time they try to cast spells of 4th level or higher in addition to any other requirements they might have to make those spells work. 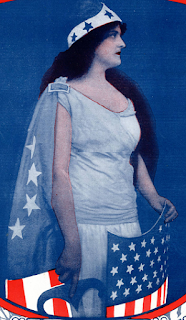 Paragons of liberty, Avatars of Columbia fervently support freedom and enjoyment of the land’s bounty. They are thus generally encountered where their sacredness lies (under Spacious Skies, amidst Amber Grain, etc.) while avoiding places that are opposed to such things (enclosed spaces, dismal places, etc.), gaining either a +3 or -3 modifier to their rolls, as a result. There are those who don’t appreciate the effects of Columbia’s philosophy when taken to an extreme though, putting her avatars at odds with certain divinities and ancestral, nature, or totemic spirits, while others might even be in favor of it. 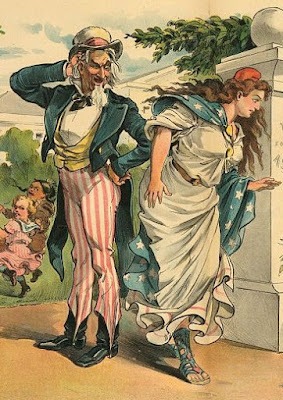 Columbia Encounters
1d14
1. The land opens up to reveal one of the types of places sacred to Columbia- see Part I for the list. Those who follow her (or at least aren’t against liberty- a base 66% chance) will gain the listed benefit upon arriving for its duration, even if they don’t cast a spell that matches.
2. Masked cultists are attempting to tear down and deface a statue of a famous cleric of Columbia: one named Cristoforo. Will the party stop them or see him as some sort of tyrant too?
3. The party comes upon a dry levy. There’s a 50% chance of 1d4 people drinking rye and whiskey there, otherwise all music dies (including any minstrels present).
4. A priestess of Sif is debating a cleric of Columbia in a cornfield. Both agree that the land should be held sacred, but argue vehemently over whether it’s proper to be unclad while doing so. Sif would insist ‘yes’, while Columbia would insist ‘no’!
5. 2d4 vagabonds leap out, speaking an unintelligible tongue. They enjoy sniffing this strange, white powder and are embroiled in some perpetual civil war- all in the name of Columbia.
6. A paladin of Columbia is baking a pie. 1d3 followers of Johnny Applewheeze arrive and want it to be apple (and especially hyperallergenic), while 1d3 followers of Paul Bunyan want it to be oversized and filled with maple syrup instead. A battle is sure to ensue.... or a food fight at least.
7. The party uncovers an enchanted sword, sacred to Columbia. It may be terrible, swift, and cause lightning damage, but it also can detect approaching lords (whether mortals or avatars) at a range of 1 mile, especially if they are marching and/or are wrathful, as well.
8. 4d20 goblins are spotted invading a land held sacred to Columbia. Will the party wish to introduce them to liberty or simply ‘liberate’ their heads from their shoulders?
9. Flying a kite is a famed, bespectacled inventor. Despite his upstanding demeanor, he actually engages in drunken orgies at some sort of ‘Fiery Hell Club’ at night, only to assert to be a devout follower of Columbia by day- early to bed and early to rise indeed!
10. A strange cult of Columbia has arisen, claiming ‘illumination’. It turns out to actually be run by
[1] extraterrestrial beings from the stars, [2] followers of the arch devil Lucifer, [3]  disciples of starting a ‘New Order of the World’ by forcing ‘Liberty’ on theirs and other lands, whether the people actually want it or not, [4] minions of Colonel Siegfried and his highly secretive chicken recipe. In any case, those who are actually faithful followers of Columbia will likely take a dim view of such heresy.
11. The locals here are obsessed with a strange game called ‘sportsball’. Most only watch it though, willing to pay exorbitant tithes to the game players, becoming incredibly ecstatic if their team makes a ‘home-down-score!’
12. In the distance lies a city with marble domes, obelisks, seated statues, and white houses. It is said to be a district sacred to Columbia, having much occult symbolism, a pyramid with an all-seeing eye at its top, and folk who are very heavily in debt but act like they’re not.
13. An enormous, copper statue of Columbia, bearing a star-crown, torch, and book, towers above. It has a 10% chance of animating each day (as an iron golem) to crush any serious forces of tyranny.
14. A crotchety old man in red-striped pants is spotted ogling a priestess of Columbia’s backside. There’s a 10% chance of them both being avatars, a 100% chance of his name being Sam, and a 0% chance of her liking it.

Next week: as I begin the revision of Volume II, we begin our series on divinity encounters for it with Brigid, Celtic Triple Goddess of Fire, Water, Poetry, & Craft!