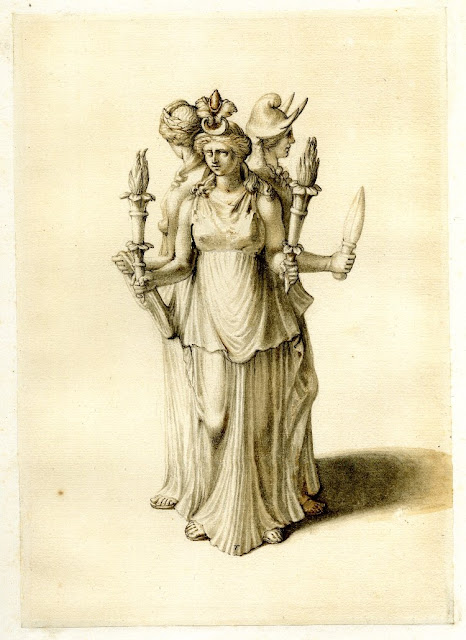 Come to where all paths meet and find Trivia, Roman Goddess of Witchcraft, Crossroads, & the Night!

2. One unlucky party member is suddenly turned into an animal (roll 1d6): [1-2] swine, [3] black dog,
[4] snake, [5] polecat, [6] cat. Investigation reveals that this is the work of a follower of Trivia who feels wronged by them and, unless other restorative magic is used, can only be remedied by making amends.

3. Mysterious and potent, one marked by Trivia watches. She is a (roll 1d8): [1-2] non-magical, though quite resourceful woman who follows Trivia, [3-4] priestess of Trivia, [5-6] witch of Trivia, [7] cleric of Trivia, [8] Avatar of Trivia, and will take a better view of those who go the way in-between, rather than the usual path. What is more, she also has a 33% chance of being trimorphed: having three merged bodies and can cast 3 spells each round, amongst other things...

4. Does this taste strange to you? It is now poisoning that an unlucky party member undergoes, needing to save vs. death or die within 1d6 excruciating rounds. As in #2 above, it is the work of a wronged devotee of Trivia, though trying to make amends afterward will do little good in this case.

5. An emblem of Trivia hangs over the next door that the party encounters. Those who attempt to enter and have engaged in great wrong (a base 75% chance if adult human or humanoid) will suffer an adverse effect (roll 1d3): {1] per #2 above, [2] per #4 above), [3] cannot enter at all (no save). Woe unto such interlopers.

6. A procession of 2d4 pale, but exceedingly beautiful woman bearing torches strolls by. Their lights are strangely maddening, almost as much as their seductive forms. They are Avernales, known to the Greeks as Lampades!
Mve: 40’; AC 9*; HD 2; Attk: torch; Dmg: 1d6; SP: 14+1d4 Charisma, cause those who first see them to save vs. spell or suffer under a Confusion effect, *all those who wish to harm them must save vs. spell first; Sve: C9, Mor: 8

7. The local cult of Trivia approaches the party to spy on a similar, but potentially rival group that has come into the area.  There is a 66% chance that the knowledge they gain will later compel the cult to wish to eliminate them, otherwise they will wish to work together. Roll 1d6: [1] Diana- a Roman Artemis/Trivia sect, [2] the Norse goddess Hel, [3] the Mesopotamian goddess Ereshkigal, [4] the Mesopotamian Goddess Ishtar, [5] the Celtic goddess Morrighan, [6] Hecate- Trivia’s Greek counterpart.

8-9. The party encounters a mysterious woman (see #3 above) who, for a price, will teach any spellcasters how to change one of their magical side-effects to one of her witchy ones. To do so, replace the magical side-effect’s requirement with one below. Actual witches may substitute all of them, though they will likely then get a look of the moon in their eyes.
I. The witch’s skin turns green(er) after casting the spell, penalizing her Charisma rolls made to be diplomatic and attractive by 1 each time it occurs (unless those who encounter her are into such things). Her rolls made to intimidate increase by 1 though, for normal folk will begin to consider her a monster.
II. Special herbs must be brewed beforehand for the spell to work, taking at least 1d6 turns. The higher level the spell, the rarer the herbs need to be.
III. A random telekinetic effect occurs 1d12 turns after casting the spell, moving the closest individual or object in a random direction rapidly 2d6 x 5’ away at a rapid rate. If a collision results, then both the projectile and whatever it hits both take 1d6 damage per 10’ traveled.
IV. The witch takes 1 damage per round when her skin touches fresh water from now on, increasing by 1 for every time she experiences this side effect.
V. For the next 3d6 turns, anyone who touches the witch must save vs. death or be cursed with a -1 penalty to all rolls
VI. Experience a magical side-effect for another divinity who is also served by witches.

11. The next time they fall asleep, the party travels astrally to join the Wild Hunt. Rather than being led by Cernunnos though, this one is led by Trivia- see Volume II for details.

12.  3d4 mysterious and potent women are in the area (see #3 above for details). Yes: the party has stumbled upon a coven. Their rituals might be eccentric, but they ultimately serve the Law of Trivia, invariably leading to a Great Rite (also detailed in Volume II).