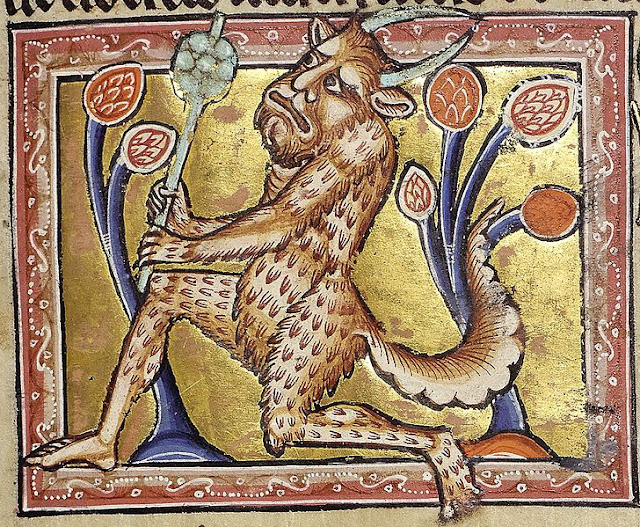 And what of the remaining types? Often conflated with elementals, fey, or even fair maidens, nature spirits embody natural places, bestowing health, harm, or even nothing in their own inscrutable and often subtle ways. Totemic spirits rather bolster: a boon to those they help and a bane when applied to one's enemies. And finally, we have undead spirits who, unlike ancestral ones, have not only failed to move on from their mortal obsessions, but now seek to drain that very vitality from others.

3. Quietly, a landvaettir (see Volume I for details), watches from this natural area invisibly while nothing else occurs. It simply is, though those with the ability to notice and speak with it may uncover more (per Referee).

3.  Bad tidings: it is now the party's next enemy that is bolstered by a totem spirit, per result #1 or #2 above!

4.  A mighty animal stalks into view. Whether it is a rare case of a totemic spirit given physical form or simply of a giant beast augmented further by its totemic namesake, the party should beware. Treat it as a giant (10 HD) version of one of the animal types listed in result #1 above, as well as it being able to turn invisible. It will also only harmed by magic weapons and 3rd level spells or greater and will attack if sufficiently provoked.


Undead Spirits
Roll 1d4
1. Many say that an otherwise normal man lurks in this area, obviously possessed. Those who seek him will find that to be true, though the undead entity inhabiting him can exhibit that possession in a variety of ways (roll 1d4): [1] obsession over finding the one who had killed the spirit's original body, [2] seeking out life force to drain (per #2 below), [3] having a disease, [4] all three.

2. The spirit of the next foe the party vanquishes in battle rises again as a fell undead. Treat it as a ghost, though what harm it does depends on its obsession in (un)life, draining with a hit (roll 1d4): [1] 1d3 levels (getting ahead), [2] 2d6 years of life (having youthfulness), [3] 1d4 Strength (being mighty), [4] 1d4 Wisdom (shirking responsibility).

3. 1d4 party members get the nagging suspicion that they are being watched. Those who investigate find that it is an undead spirit (see #2 above), though it will only reenact the nature of it's death; that is, unless they taunt it by displaying what it obsesses over.

4. Something dark dwells here. A spirit lost to that what was once given, but then became unrequited, doomed by love itself. Attacking like some sort of  wraith, it looks for any others who now have what it lost, draining them of 1d3 Charisma. Who could love them now?

DCC RPG Conversion Notes
Referee= Judge
Constitution= Stamina
Dexterity= Agility
Charisma= Fellowship
Wisdom= either use the optional rules in Volume I or Luck
Save vs. spell= make a Will save DC 15