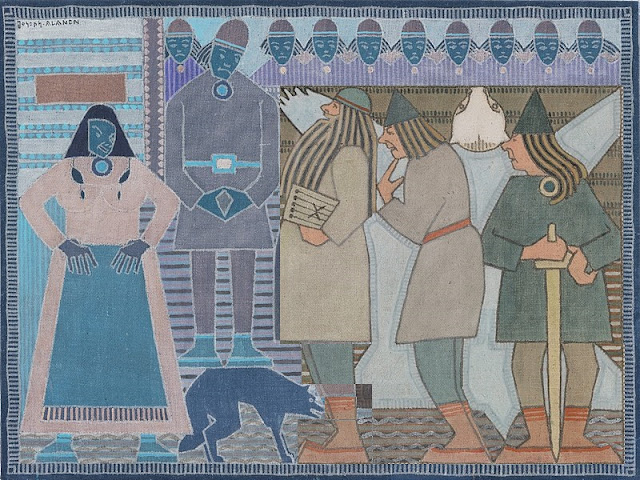 Pohjola demands dark deeds to harm those that they claim to have harmed them.

Divine Tests
1-9. Show those uppity lighter-types a thing or two! The noita must bring about some woe upon a Finn, preferably a Finnish man, though if such are unavailable, other types of western humans will do. Until then, Louhi will bar the noita from using some of her spells (50% chance for each one), possibly including her turn ability. Roll 1d10 for each one lost to see what must be done to reclaim it.
[1] Cajole the next one she meets, demonstrating the hospitality of Pohjola.
[2] Find and harass one at their home or place of work, refusing them rest .
[3] Arrange a beating, though the noita will need some minions to make sure the victim is outnumbered so that it's especially demeaning.
[4] Offer one something of beauty in return for performing some task, and then refuse them it even when accomplished.
[5] Give them one of the 9 diseases- any of the noita's magical side-effects would do nicely.
[6] Take one's possessions, excusing the theft with the claim that they were probably already stolen anyway.
[7] Get 2d4 minions to defile and despoil an undefended place or symbol held sacred by them, all in the name of 'justice'.
[8] Subvert one of their votes or officials, so as to turn things in favor of Pohjola. If unclear, an emissary of Tuoni (Louhi's father and the Finnish equivalent of Nergal- the latter detailed in Volume III) will arrive to help show the noita what to do.
[9] Put their name on a list, allowing other Pohjolans to know where to best attack them.
[10] Have a dangerous beast, preferably a hound or a bear, greet one as a guest for dinner.

10-16. How better to serve the Hostess of Pohjola than to become more like her? The noita becomes uglier; blacker in heart, soul, and visage, making her unable to help another (even a Pohjolan ally) 25% of the time, increasing by 25% more for each additional instance that she experiences this test. Unfortunately, she also gains another unnatural ability too (roll 1d4):
[1] +2 to all saves, [2] +1 to all rolls for one random spell she knows, [3] may cause fear (as the spell) once per day, though the save is 4 easier than usual, [4] can sense the presence of Finns (or the like) within 60'- all the better to harm them


17+ Louhi grabs the sun and moon (or performs some similar apocalyptic act), causing great calamity in a 1-mile radius. All within that area must save vs. death or experience a random misfortune of her side-effects. The noita is affected differently though: she must save to resist losing her most treasured item, as Louhi lost the Sampo. And for every divine test result over 17, the affected area increases by an additional mile. The noita would naturally wish this to occur in Finnish lands, though the presence of any devout followers of Vainamoinen would make the save 4 easier for all who would resist such disease and 4 harder for her to resist losing her item.