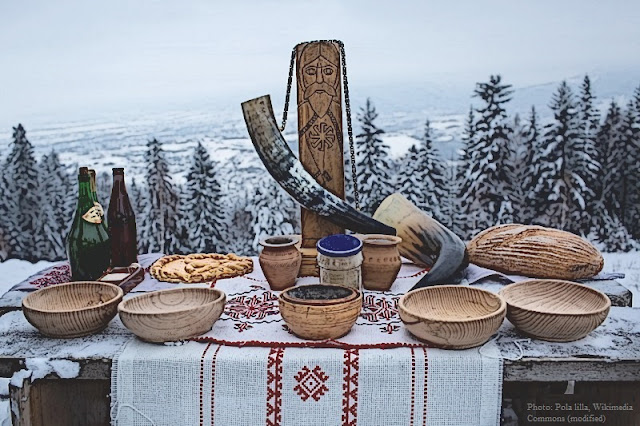 Dazbog shows the light amidst the rays of the setting sun.

1-3. The area grows increasingly contrasted, absorbing the cleric's attention for 2d6 turns; 1d6 turns if he successfully saves vs. spell. Others within 60' will also be so affected, moved by such potencies of light and dark.

4-9. Opposites abound: which will Dazbog have the cleric seek? Roll 1d6 to find out, noting that each time it must be from a different source or a new place- seeing the same thing burn or the sun from the same angle just won't do. Until then, the cleric loses access to some of his spells (50% chance for each one), including possibly his turn ability.
[1] Bright light or deep darkness
[2] Fire or water
[3] Good luck or bad
[4] Dawn or dusk
[5] Sun or moon
[6] Reroll 1d5, but rather than just one being needed to be seen, both are

10-14. Above or below, Dazbog moves to let the world know. It is now the cleric who, with a base 25% chance of it occurring for every new encounter, grows (roll 1d4)...
[1] Bright: emitting light as a lantern, even when inopportune.
[2] Fiery: burning for 1d2 damage all that he touches with his hands.
[3] Watery: moistening all within 10', as if recently rained upon.
[4] Wolf-like: scaring those who don't like the lupine- save vs. spell negates.

15-17. The cleric is lent a splendid chariot, replete with amazing, solar steeds and lined with gems, precious metals, and other finery. Such a vehicle allows him to fly at double his normal speed, improve his AC by 6, and even gain a +8 Charisma bonus with those who are impressed by such things. Unfortunately, it is taken back right before the next sunrise (Dazbog needs it after all). Then, for the next 1d3 days, all the cleric can do is sleep, for he has been too drained from the experience.


18+ The sun rises only to fall again. Roll any die: evens= Belobog; odds= Chernobog. In the former case, it becomes or stays a bright day, the cleric must act Lawfully, and do only good deeds. In the latter, it becomes or stays dark night, the cleric must act Chaotically, and engage in deeds of woe. Either lasts for 24 hours, plus 24 additional hours for every divine test result over 18. Afterwards, the cleric will simply serve Dazbog again; that is, if he survives the upheaval.