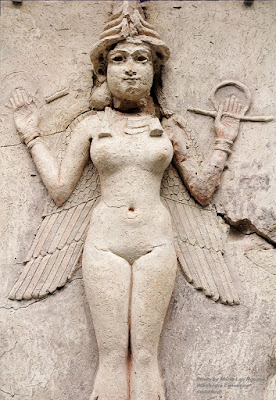 Coming on the heels of Easter, we present 4th in the series on gods and goddesses from the upcoming Divinities and Cults: Volume III: Ishtar, Mesopotamian goddess of love, war, & magic. Not only does her listing in the book contain bonus rules for determining Victory in Love & War, but also various options for Mesopotamian Magic. Until then, here are a number of memorable happenings within her purview.

Ishtar Encounters
1d12
1. A random, lucky woman in the party is granted a +3 bonus to all rolls to hit by Ishtar for the next week, but only if she acts as qadishtu (sacred prostitute) at least once before the next dawn.

4. The party discovers a strange, knotted hook. The item grants a +3 to all saves vs. magic but only to those who follow Ishtar’s tenets. Otherwise, it has the opposite effect.

5.  1d3 lions leap out suddenly. They will attack followers of Ishtar or similar divinities last, unless said followers escape before the lions are finished feeding.

6. Two individuals are dueling. The reason turns out to be (roll 1d4): [1] one insulted the other, [2] one boasted that they were better at fighting than the other, [3] the winner gains the favor of a lover, [4] the duelists are lovers.

7. While being interrogated, a woman keeps uncrossing her legs, revealing her lack of undergarments (as well as her forbidden zone). Any who attempt to stop the interrogation (or her risqué movements) will then experience one of Ishtar’s divine tests!

8. The next woman a party member lies with turns out to actually be: [1] a priestess of Ishtar, [2] a qadishtu, [3] a red devil woman, [4] an Avatar of Ishtar. In any case, she has a 66% chance of being at least mildly dangerous and a 100% chance of causing a mild heart attack.

10. The party stumbles upon an enkidu chastising a cleric of Ishtar. Do they intervene or not? How about when the cleric begins to stab him to death?

11. The last foe or foes that the party defeated returns as zombies, escaped from the Underworld thanks to Ishtar’s wrath, in the name of waging more war. Hopefully, they aren’t seeking love too.

12. Tidings foretell that a great, falling star will be impacting soon, obliterating all within a 1d6 quarter mile area. It will land within 1d20 hours and woe unto any who remain.