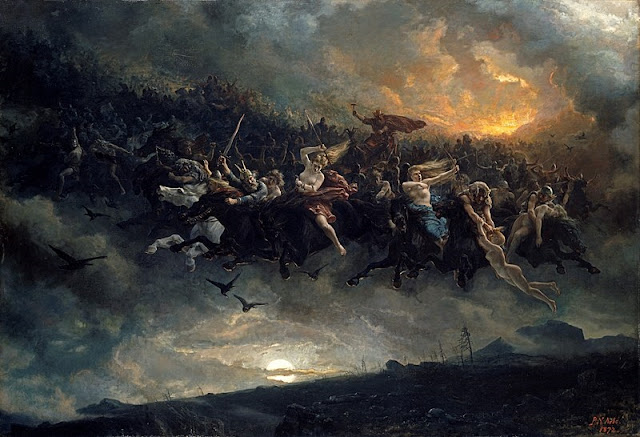 Now that one might know what to expect when encountering spirits of various types, it would behoove us to determine when such spirits may be present. Still, they may go unnoticed unless the mortals there are cleric-types who  save vs. spell. If successful, they may then choose to interact with the spirits- see Divinities and Cults: Volume II and Spirit Encounters Part I, II, or III for additional details and encounter ideas. Note that shamans will notice the presence of any spirits automatically, but may wisely try to ignore them anyway.

Roll 1d6
1. An invisible elemental is drawn here by the fighting, likely one of fire (a base 75% chance), though one of the other types (water, earth, or air) might have been attracted instead. In any case, things are likely to get intense, with all damage and healing occurring with a +1d6 modifier.

2. Mysteriously, a random combatant is bolstered by the essence of a totemic beast (see Part III for modifiers). There is also a 25% chance of an opposing totem bolstering one of his foes as well- one beast to face off with another.

3. Kill! Kill! An ephemeral demon is present, though whether drawn to the murder here or being its actual cause, few can tell. Whatever the reason, it compels those who would spare a foe to instead save vs. death or finish them off anyway. Still, an angelic spirit has a 50% chance of arriving too to counter it and will certainly not spare the demon.

4. There's quite a score to settle. 1d3 random combatants feel the strength of their ancestors and gain a +3 to all rolls made to fight those of another country, creed, or breed.

5. How to choose the slain? 1d6 stunning valkyrie watch the battle, visible only to those about to die, waiting to bring the worthy to Valhalla. Even those who fight well and survive might earn their fair maiden attention (a Charisma check).

6. Wondering at all the fuss, an ethereal pixie causes an unlucky combatant to suffer a combat mishap- roll just a d10 on the Battle Event table found in Volume II. Maybe now they can go back to having some fun.

Wifeing
Roll 1d6
1. Fey love, the attraction between the man and woman is whimsical, enchanting from the unseen faerie watching. It bestows a +3 boon to all romantic rolls they make, but such love is also fleeting and ends completely within 4d6 hour's time, effectively turning one of them into a pumpkin (save vs. spell negates the latter effect).

2. With an animal magnetism, either the man hunts for his mate or she draws him in with hers (an equal chance of either). They will then become quite passionate, but also aggressive, causing both to take 1d6 damage and to certainly sire offspring from such a rut.

3. A hidden, fair maiden muse is at work here, either secreted in the form of the woman loved or simply arranging the encounter to help inspire the man. If he properly interprets the experience (a Wisdom check), then she will help to get his creative juices flowing in any case.

4. Lust abounds, easily corrupted. A demonic essence watches the two, waiting to pounce and cause something nasty to happen as a result of their courtship (per Unharmonia in Volume I). If both save vs. death though, then they will be spared.

5. Loving you... After the encounter, either the man or the woman seems drained somehow and withdrawn. If the other persists, then the negative one will actually suck one character level away from them due to the undead haunt that has taken up residence within. Needless to say, the relationship has likely taken a turn for the worse.

6. Nature spirits rejoice in this act, driving the lovers to be all-natural and free, no matter who else can see. Only a save vs. spell can resist such an obvious mating display.


Magic
Roll 1d6
1. A mighty totem makes its presence felt, granting the spellcaster a taste of its power for the next 2d6 rounds (detailed in Part III).

2. One always wondered whether he or she was watched over. Turns out that the spellcaster has been: by their guardian angel, granting a +1 to all rolls when being moral, -1 when not.

3. Chuckling with glee, 1d3 leprechaun spirits cause those who cast spells here to roll twice for their magical side-effects and have both occur.

4. Thanks to a profound elemental presence, the next spell involving fire, air, water, earth, or some other primal element is doubled in magnitude: power, area of effect, and range- even if the caster would not wish it to.

5. What of balance? If the caster forgoes using his magic for the next 1d6 turns, then he will gain a +1d6 bonus to all rolls for the next spell he casts after then. The nature spirit watching would certainly agree.

6. Ancestral phantoms become triggered by the casting, knocking over anything within 30' that's not a traditional item (at least 3d6 decades old), along with any whippersnappers who aren't the same.


Illness
Roll 1d6
1. It runs in the family... It is actually an ancestor that is causing the malady, either as some karmic price yet unpaid or simply the way things have always been. Traditional healing would be the only remedy.

2. Flowers and the earth's bounty can bring succor, but sometimes the reverse. A spirit of nature, either twisted somehow or perhaps it is the mortal who has been so changed, has caused this reaction. See Johnny Applewheeze for the result, though the remedy might be different herbs indeed.

3. Why not have a little more? An unseen sprite may have led the mortal a bit too far this time, into heavy overindulgence. Best now to abjure sweets and (especially) strong drink for a time.

4. With one's vital humors being so imbalanced, it is obviously an elemental at work here (roll 1d4): [1] fire - choleric, [2] water - phlegmatic, [3] air - sanguine, [4] earth - melancholic. The only remedy for such dyscrasia is a rebalancing with its opposite, or a good amount of bleeding (1d8 hit point's worth).

5. Taxing, this is. It drains and leads to unmet dreams of what cannot be had, one would think an undead specter had caused it. In reality, it's the work of a fair maiden, driving the mortal to seek the very love that causes such pain.

6. The only outlet for such a disease, itself nasty and wrong, is doing more wrong- just as the demon who laid the curse  would have it. Whether by angel, fair maiden, or totem (depending on the afflicted's way), only by a follower of a divinity who is served by such beings (see Volume II for the list), can the cure be made, and the demon banished.