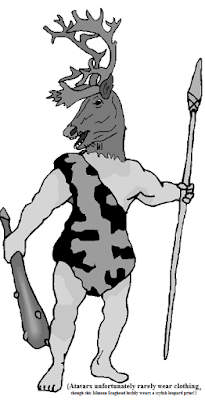 Not to be confused with avatars (the physical emanations of Gods), atavars are humans with the heads of animals, often ruminants. Though the varieties and types of atavars may have different tendencies in their behavior, all are hostile to civilization and its effects on animals, even taking it upon themselves to treat humans like pets and livestock. A hunting party might be very surprised to find a barking woman on a leash, or even a man being put out to pasture by some animal-headed master... before he becomes its dinner steak!

Atavar Varieties
Most encountered in the Vale have either stag, ram, or bull heads, though other herbivores and even some carnivore heads have been reported.

Stag or doe-headed atavars are usually found in the deep forests. They often enjoy turning the tables on those who overhunt or over- log, though those who respect the wilderness may just be ignored.

Ram or she-goat headed atavars are instead more often found in lonely hill or mountain areas. Unlike satyrs, those fey-like beings that lack full goat heads and enjoy frolic of all kinds, Ram atavars will likely attack any civilized-seeming intruders in order to subdue, shear, or even challenge them to a head butting competition.

The Bull or cow-headed ones are more often found in deserted fields. Though they may appear similar to Minotaurs (to which they are related), they remain man-sized and are less concerned with labyrinths.  Those unfortunate enough to meet them and appear or act in a civilized manner will face goring and even possibly the terrible experiencing of being milked.

Atavars are further divided by how animalistic or human they appear.

Arcadian: though the head, legs, and lower torso are animalistic, the upper torso, arms, and hands will reveal bare human flesh. Arcadian atavars are the default type of atavars encountered.

Antediluvian: animalistic all over; essentially an animal that walks upright with longer hind legs and hands, rather than claws or hooves. Antediluvian atavars are stronger, tougher, and faster than their Arcadian cousins, but also less intelligent and are incapable of using tools or weapons.


Minoan: only the head is that of an animal: the rest of the atavar’s body appears human. Unlike Arcadians, Minoan atavars are quite intelligent and even refined, but not as strong or as tough.
Posted by Dan Osarchuk at 4:20 PM