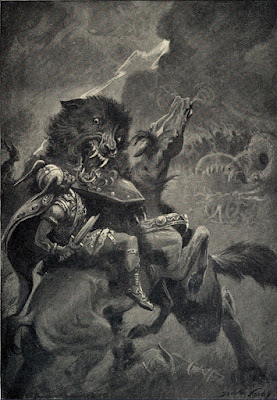 Healing Side-Effects (Fenrir)
The Fenris Curse allows the cleric to recover hit points by consuming his prey (2 per HD per 1d6 rounds of eating), but there are other, more versatile (and upsetting) methods for the Great Wolf to provide succor (though few might want to experience them).

1-2. My, what big teeth you have... The patient is just too delicious to resist! The cleric gets a free bite attack on them with a +4 bonus to hit and damage (since they most likely weren’t expecting it) and then must keep biting them until the cleric is wounded. Even though the patient won’t receive any healing in this case, the cleric will at least gain some hit points if he ends up consuming them!

3-4. Bite makes right: Toughening the patient up a bit, the shaman makes a bite attack for just 1d3 damage (even if of a higher level where he would cause more bite damage). Afterwards, the shaman doesn’t have to keep biting them (emphasis on ‘have to’) and they will receive normal healing; that is, if they don’t try to bite the shaman back!

5-6. This healing will charge you an arm... It’s no little nibble that Fenrir wants now, but have no fear: someone else can suffer in order for it to work. The cleric must bite a sacrificial victim for the same amount of healing that he will bestow, also granting 2 extra points of healing per HD the sacrifice has (or had). He should make sure not to let the followers of Tyr know if he actually does take off an arm though.

7-8. I’ll huff, and I’ll puff. Have you consumed the sun? Eaten the moon? Blown down a house made of straw? Only those who have caused some wanton destruction within the last few hours will receive healing, and with 50% extra bestowed if the destruction was particularly terrifying (per Referee).

9-12. Blessing of Fenrir: The patient is healed automatically for the spell’s full amount. What is more, he or she also gains a +1 bonus to hit and damage rolls when in melee for the next 1d6 turns, though they must also save or begin devouring any fallen foes (see Fenris Curse)!

Next week: Clerics of Fenrir (Part III)!
Posted by Dan Osarchuk at 4:48 PM No comments:

Clerics of Fenrir (Part I) 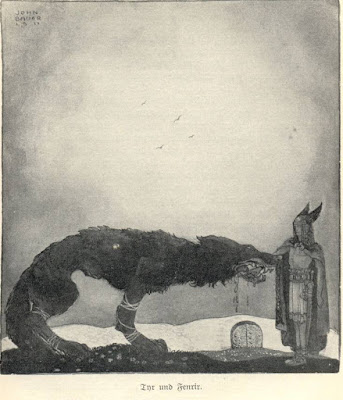 Tenets of Fenrir
* Let nothing chain you, even Gods
* Be a ferocious hunter, grow strong
* Consume all that get in your way
* Destroy the world

Clerics of Fenrir
Special: Clerics of Fenrir are also known as shamans.
Allowed Weapons: Dagger, wolf bite (see below)
Allowed Armor: None
Holy Symbol: Large Wolf, Hand Bitten Off
Can Turn: Clerics of the Gods (especially Norse ones: +2 bonus; -2 penalty vs. others)
Fenris Curse: Clerics of Fenrir can make a wolfish bite attack every round of combat, causing 1d3 damage at 1st level and increasing the damage die for every odd level thereafter (i.e. 1d4 at 3rd level, 1d6 at 5th level, etc.)

What is more, clerics of Fenrir must Save vs. Spell to not immediately devour any victims that they have slain, a process that takes 1d6 rounds for every HD the victim has. They suffer an AC penalty of 6 while eating (unless they drag their prey to a safe place), but also gain 2 bonus hit points, as well as a +1 Strength bonus per HD of wolf-chow consumed afterwards. The bonuses last for the next 24 hours, but the lamentations for the fallen can last far longer.

Next week: Clerics of Fenrir (Part II)!
Posted by Dan Osarchuk at 3:55 PM No comments: 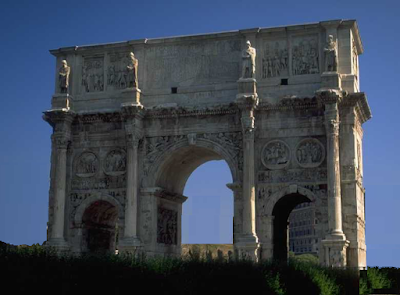 Cleric Spells (Janus)
Janus’s focus is on time, space, beginnings, and endings and so too do his clerics mainly cast spells of that nature, some even requiring gateways or other portals to work.

1st Level: Cure Light Wounds, Detect Evil, Detect Magic, Protection from Evil, Remove Fear, Sanctuary (can also be cast on others who stand near portals or who are making new beginnings), Hold Portal* (PT), Message* PT (does not need line of sight)

6th Level: Blade Barrier PT, Find the Path, Heal, Word of Recall PT, Greater Teleport PT (as Teleport*, but no chance of being off target)

PT: Spell requires a nearby portal, such as a gateway, door, or other opening to work. Note that Janus Mysteries will also then grant a +2 bonus to all of the cleric’s rolls related to the spell.
*: Magic-User Spell

Portal Encounters
The thresholds of Janus can be simple or elaborate; mundane or even magical pathways to another world. Whatever the case, those who travel through will likely be making a new beginning.

P: Unless the past isn’t altered in any way by the time travelers (a very unlikely event), then those returning will likely end up in an alternate reality/ Otherworld due to the paradox(es) they cause(d).

Next week: Clerics of Fenrir Wolf!

Posted by Dan Osarchuk at 4:45 PM No comments: Liminal Space
Janus sends his faithful through many thresholds so that they might better understand the implications of space and time.

Divine Tests
1-2. Are you administering the proper rites? The cleric apparently needs more practice honoring new beginnings and measuring how much has already been done. He must now take 2d6 turns of time, as well as having a 50% chance of needing to sacrifice at least 1d6 x 10 gold pieces in treasure or goods, in order to do so.

3-4. A firmer reminder is now required. The priest is immediately shifted in time or space, suffering a -2 to all rolls for the rest of the day and possibly other considerations. Roll 1d3.
[1] Be sent 1d100 minutes into the future- he will experience it as lost time
[2] Be sent 1d100 minutes into the past, being able to even change it, but then suffering 1d20 damage from any paradoxes caused
[3] Be sent 1d20 feet in a random, horizontal direction, taking 1d3 damage and being pushed aside if he would materialize in a solid object

5-9. Duration and dimension can necessarily limit a cleric’s magic. As a result, he experiences a reduction in spells available (50% chance for each one) until dawn of the next day.  Roll 1d6 for each spell lost to determine what the cleric needs to happen in order for him to be able to use it before then:
[1] Arrive at a certain hour: roll 1d12 to determine what hour that is, ignoring whether the time is before or after midday
[2] Pass through a gateway, doorway, or other portal that he has never traveled through before
[3] Prevent all evil beings from passing through the nearest gateway, doorway, or other portal for the next 1d3 hours
[4] Open and pass through a gateway, doorway, or other portal that is currently locked or guarded
[5] Be at an area of synchronicity of time and space (e.g. a location associated with 144 at 1:44)
[6] Defeat one that has violated the laws of time or space (e.g. undead or summoned being)

10-12. Liminal Space can have broader applications, so in this case, use a Test from a similar Divinity rather than one from Janus. Roll 1d3:
[1] Manannan (otherworlds caused by time and space)
[2] Mars (beginnings of war)
[3] Mercury (gateways of trade)

See Divinities and Cults: Volume II for details on these Divinities. In the case of Manannan, explain the sense of not belonging or being otherworldly to the worship of Janus being more popular during archaic times.

13-17. A greater understanding of space is now required of the Janus priest, as well as anyone else who happens to be standing within 1d6 x 5’ of him when this Test occurs. They are immediately teleported a certain distance in a random, horizontal direction, also taking damage from any unfortunate collisions and/or elevation adjustments that might occur when they arrive at the destination. Perhaps he will remember to stick to proper rites for all new beginnings from now on? Roll 1d4.
[1] 1d100 feet, 1d4 damage
[2] 1d10 quarter miles, 1d8 damage
[3] 1d100 miles, 1d10 damage
[4] 1d1,000 miles (roll a 1d100 and add another d10), 1d20 damage

18+ As ‘Janitor’, Janus needs to clean up the cleric’s mess and show him that once and for all, time and space are one. After allowing him to view a temporal mishap that his lack of proper ritual has likely caused (or will cause), Janus then causes the cleric to either (roll 1d3):
[1] Travel 1d10 years into the past
[2] Travel 1d10 years into the future
[3] Enter an alternate reality with 1d4 divergences caused by paradoxes in the timeline (see the Manannan listing in Divinities and Cults: Volume II to generate divergences at random)

Those standing near the cleric when this Test occurs can also be transported with him (per Referee). And, unless the cleric finds another way to immediately return to his original time or reality (a base 5% chance per level), then those transported will end up being stranded. They then have a 50% + 10% chance per level of returning (or seeming to return) by either:
[1] Showing up immediately to find the party again but years older (if they were transported to the past)
[2] Reappearing again years later at the same place and at the same age (if they were transported to the future)
[3] Being switched with an alternate reality double that has a 50/50 chance of being either kinder or crueler and also has all ability scores adjusted by 1d6-3 (if they traveled to an alternate reality).

Otherwise, they will not return. What is more, for every Liminal Space result over 18+, increase the time travelled by 1d10 additional years and increase the divergences by 1d4!


Posted by Dan Osarchuk at 4:48 PM No comments: