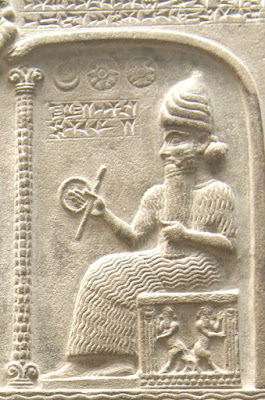 7th in the gods and goddesses series for Divinities and Cults: Volume III, we have Utu, Mesopotamian god of the sun, truth, law, & justice.

And if you haven’t gotten your copy yet, you should! The Labyrinth Lord version is available now.

Utu Encounters
1d12
1. Bright light fills the area- is it the sun or another divine manifestation? Unless those who see it are followers of Utu or some other solar deity, they will be blinded for the next 1d20 rounds. Any beings of darkness take 4d20 damage.

2. Two individuals stand facing each other. They stare angrily with weapons at their sides, but those weapons are still sheathed for now. It is nearly high noon. Does the party intervene or run for cover?

3.  A cleric of Utu offers to accompany and assist the party in their quest. It soon becomes obvious though that, thanks to a divine test, his shoulders always shine light like a torch. Though his services might be much appreciated, he may actually hinder tasks that require subterfuge...

4. Signs for missing people are posted along the side of the road. Inquiry reveals that a troupe of horse-riding rakes is somehow involved. Further investigation shows that they are not only lawbreakers responsible for all the lost boys in this beachlike area, but are also foul creatures of darkness too (vampires)! Two adolescent followers of Utu might be the party's only hope.

5.  A snake, a bird, and a minor demon walk up to a willow tree. The snake must be killed, though the bird and minor demon can be driven off easily with enough yelling. Afterwards, there’s a 75% chance of a priestess of Ishtar arriving in order to command the party to turn the tree into her throne- all in the name of Utu! If so, then there’s a 100% chance she’s not joking.

6. Sounds of battle ring out up ahead. An armored hero is fighting some sort of winged dog-beast... and he is losing! Does the party intervene? If they do, they discover the hero to be a paladin of Utu and the monster to be a dreaded anzu!

7.  An attractive woman chooses to accompany a lucky male member of the party. She is actually a (roll 1d3): [1] Naditu (temple nun), [2] Shamhat (temple prostitute), or [3] priestess of Utu. In any case, she is likely also ‘brilliant’ and/or a ‘lioness’ (75% chance of each), no matter what her vows are.

8. The nearby folk have become entranced by strange boxes that show dancing images to those that look within them. The local lord (a devotee of Utu) has grown concerned, since the folk no longer work, but instead only lay about all day and stare. The boxes turn out to be the sorcerous work of the insidious demon lord Ghul-Ghul, who wishes to lull the land into weakness and thereby allow an invasion of Ugallu (lion men) and Uridimmu (dog men) to commence uncontested. That the name for the boxes sounds much like ‘Utu’ only makes matters worse.

9. The party stumbles across a grandiose hat. Unless already obvious, sages will show it to be that of a Mesopotamian god (for it is horned w/ a brim, etc.) and it allows the wearer to cast a random 1st level spell from Utu’s list up to three times per day.

10. Bathed in radiant sunlight, a Mesopotamian white temple is spotted up ahead. It either (roll 1d4):
[1] is under siege by 3d6 Kulullu (fish men), [2] is hosting a celebration of 4d6 humans, [3] appears deserted, [4] seems normal. See also Mesopotamian Temples in Volume III, listed under Utu, for more details.

11. Suddenly, a golden chariot appears, piloted by a lone and shining individual. He is a (roll 1d4):
[1] cleric of Utu, [2] priest of Utu, [3] paladin of Utu, [4] Avatar of Utu. If the party has been following the cause of Law and Justice then he will bestow a blessing upon them. If not, then he will attack!

12. Utu takes direct interest in the party’s affairs. If they are traveling and already on a quest, then he will aid them (see his divine test 17+ for ideas). If not, then he will set them on a quest and then give the aid anyway.

Next week: we take a short break from cleric encounters to take a look at how to convert Healing Side-Effects to Magical Side-Effects, a modification currently being made to Volume I (for both Labyrinth Lord & DCC RPG)...