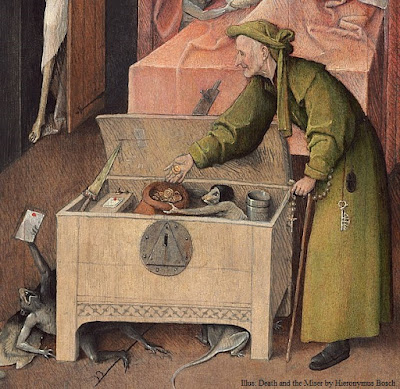 Spells
Skilled at conjuring apparent wealth, holding it, and duping others, moneychangers must recruit the forces of other Fell Lords if they wish to work different magics. Such are the devilish ways of Geedeeoee, and such cleverness will come at a cost (1d10 gold pieces per spell level cast). Moneychangers who fail to pay up in these cases (or somehow otherwise foul the spell) will incur the wrath of that Fell Lord via a divine test with a +4 modifier, especially if they use Golden Promises as payment.

For example, if a moneychanger were to cast Command, then he'd only have to roll for Geedeepee's magical side-effects. If he wanted to cast Cure Light Wounds though, he'd also have to pay an additional 1d10 gold pieces to do so since the magic for that spell would be sourced out to the Arch-Devil of Ill-Healing, Tyranny, Waiting, & Cost. He'd also roll on the Shield Ghul's test table if he rolled a one on his casting roll or otherwise provoked a test, and that test would be more difficult than normal.

1st Level: Command, Cure Light Wounds (via the Shield Ghul), Protection from Evil (via Beliah), Remove Fear (reversed, via Tezschnaz), Sanctuary (if at a market or place where wealth is stored), Charm Person* (with regards to money matters, for all others, via Unharmonia), Floating Disk* (via Enak), Hold Portal*, Identify*, Jarring Hand* (via Balor), Mending*, Message*, Read Languages* (via Ghul-Ghul), Shield* (via Enak)