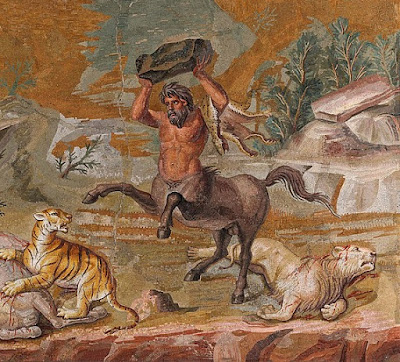 Large men (usually) with the four-legged bodies of horses, centaurs are often savage and drunk. They were born of the pairing of Ixion and Nephele, and are seen as accursed or even vile by the faithful of Zeus and Hera as a result. Instead, they are mainly associated with Aphrodite and Dionysus. Still others call Cronos their patron (link), following in the more refined (but still four-legged) footsteps of Chiron, while a few others have the more civilized ways of Apollo.

Centaur's Disposition (d6)
Not all are of a Sagittarius disposition...
1. Calm & Instructive (& Sober)
2. Calm & Instructive & Drunken
3. Drunken Only
4. Drunken & Lascivious
5. Drunken & Murderous
6. Drunken, Lascivious, & Murderous
Centaur's Special Abilities (base 5% chance for each)
- Bearded: centaur is somewhat older and wiser.
- Bucentaur: centaur has horns*, allowing it to charge for 1d4, 1d6, or 1d8 + HD damage (determine which die to use, and therefore the size of the horns, at random).
- Centauride: centaur is female, 25% chance of some stallion parts too.
- Centaurmach: Especially hates Lapiths: due to events of the Centaurmachy, +2 to all rolls made to harm actual members of that tribe, or similar stone age humans at least.
- Human Forelegs: centaur's speed is reduced by 25%, but it can now actually resist drinking alcohol.
- White Coat: centaur's horse hair parts are white, making it very pleasing to the eye, but unfortunately a popular choice for horse sacrifices or worse.
* Note: bucentaurs shouldn't be confused with centaouroid minotaurs; the former have horned human heads, the latter have horned ruminant heads

Summoning Centaurs
Clerics (and other spellcasters) of divinities and cults listed above can add the spell Summon Centaur to their spell list. Treat it as Summon Monster, except that only 1 centaur may be summoned at a time, up to a total of 2 per day, its HD (usually 4) determining the appropriate each Summon Monster spell's level. It takes 1d6 rounds for the centaur to arrive and then the spell's duration begins- when the cleric can actually give the monster commands. Once the duration ends, the centaur will act according to its disposition (if it still lives, either remaining or leaving the area) unless the cleric successfully casts another Summon Centaur spell to control it once more.
In any case, providing the centaur with an offering (or sacrifice) that fits its disposition can increase the spell's duration by 50 to 100% (per Referee), starting after the centaur is done partaking of it. Almost always, providing a centaur with plenty of wine will coax it to stay around.
Next week: Greek priests & priestesses (and other cleric types)!