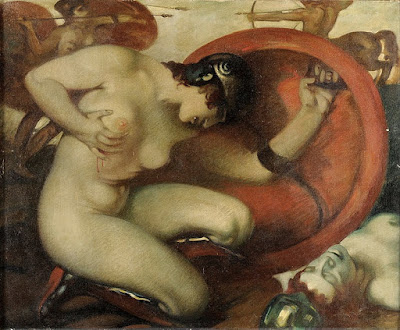 These women warriors aren't 'men' of course, and are in fact known for their disdain for them. Fittingly, they gain bonuses when fighting men, as described in Volume I. In addition, Amazons can have other considerations, whether they choose to remove one of their breasts or not.

Divinity/Cult Patron (select or roll d8)
Though most well known for following Hera, they can follow other divinities too and thereby be granted +1 Strength along with other benefits listed below. In return, they suffer a -2 to all rolls made when attempting to harm other women and even lose their strength bonus when in the service of men. What is more, when an amazon attains 4th and 8th level, she can pledge herself to an additional divinity, gaining that special benefit too, but also an additional -2 penalty to harm other women.

1-2. Hera: -1 to all rolls for any men who are within 10' of her due to her domineering presence. Always well-dressed.
3. Aphrodite: -2 to all rolls for any men who attempt to harm her due to her beauty. Often nude, which can make it even harder.
4. Ares: +2 to physical damage done to men, with a vicious look in her eyes. Bloodstained clothes are often apparent, if not nude.
5. Artemis: +2 to ranged rolls to hit since one breast is removed. Dress is often modest and light.
6. Athena: +2 AC bonus due to better armor. Always well-clothed.
7. Demeter: +2 to all Strength-based rolls and checks due to her exceptional size. Often clothed primitively, if at all.
8. Unharmonia: +2 to magical, poisonous, and emotional damage done to men due to their lack of souls. Dress depends on what will cause the most man-suffering.

Amazon's Disposition (d10)
1-2. Gentle: treats males fairly well, taking pity on their obvious inferiority.
3-4. Ready: willing to ride a fitting man- how else to make more amazons? She may even let him live afterwards (a base 50% chance- see also Volume III, p.8 to see who is victorious in love and war to help in that determination).
5-6. Moderate: tolerates males, just as long as they don't get in her way...
7-8. Dire Queen: all men must submit or suffer greatly!
9-10. Man-killer: attempts to slay every male who looks at her funny.


Special Abilities (base 5% chance, roll d4)
Though rare, some amazons have mythical traits, with a higher chance of having it if they're a follower of a particular deity.
1. Aphroditos: the amazon is very popular amongst other amazons (10% chance if follower of Aphrodite).
2. Gigantia: even moreso than the usual amazons who follow Demeter, the amazon can cast Enlarge on herself 1d4 times per day, becoming giant (10% chance if follower of  Demeter), though she also loses 1d4 Intelligence.
3. Horned: certainly standing out in a crowd, the amazon has small horns that can grant her a +1 any roll she makes, usable once every hour (10% chance if follower of  Artemis), though non-amazons might take them for devilry.
4. Hippolytan Lure: the amazon possesses something quite beautiful (see what's so attractive in Volume I, p.13). increasing her Charisma by 2, but also making her a likely target for abductors/suitors.

Otherwise, treat amazon priestesses as female clerics, except that they also roll on the tables above, accessing special advantages and restrictions, just like (the solely martial) amazons do.

Amazon Guardians
Not only do amazons protect amazon priestesses, but they have been known to protect normal human priestesses and female clerics of the gods and cults listed above too. With the Referee's permission, they may be recruited as hirelings or attracted as retainers to them. 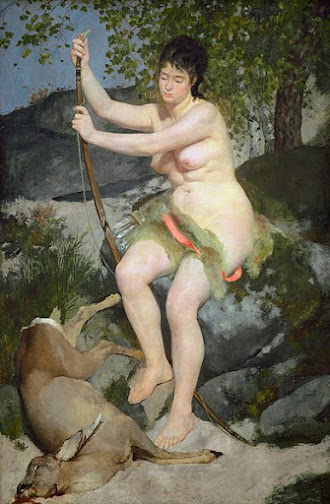