On the Nature of Cults 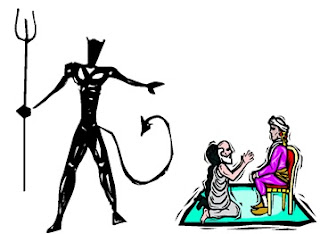 Cults corrupt. Unlike the followers of the Gods, those who espouse real, practical aspects of existence, cultists follow Fell Lords that pervert that which is natural and right. Whether a Demon Lord, Arch Devil, or the like, such beings are necessarily flawed and thereby also impart such limitations upon their followers. As a result, they can be effectively counteracted by those who follow a certain virtue. Potential victims who truly follow such a wise path gain a +4 bonus to Save against the magical powers of such cults.

For example, Beliah is an Arch-Devil who deals in the corrupted idea of wishes: one can get whatever one wants, just by wishing it. If it doesn’t then happen, it is only the wisher’s fault. Such lies can destroy those who fall into their trap, but they can also be counteracted by the modesty of those wise enough to remember to enjoy that which the Gods have given them already, and to avoid the devilry deception of False Promise.

See Divinities and Cults: Volumes I & II, or the upcoming module: The Wyrd Ways of Walstock, for more details on the followers of these fell beings.